Forgiveness from a driving iron? You might be quite surprised about these new golf clubs from TaylorMade. 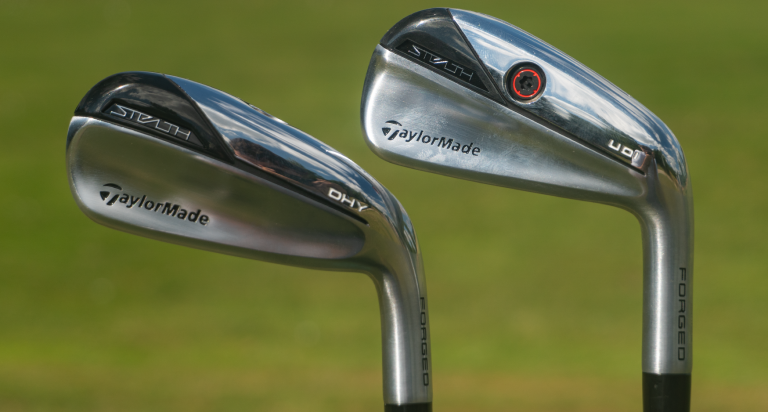 Driving irons are the perfect golf clubs for bridging the gap between your shortest golf fairway wood and longest golf iron.

When it comes to the best driving irons on the market, few are more impressive than TaylorMade driving irons and the story is no different with their brand new Stealth UDI and Stealth DHY for 2022.

Whether it’s a tight tee shot or reaching a par five in two, golfers need to be able to confidently pull a club and know it’s going to fly like they envision.

The all-new Stealth UDI and DHY are powered by SpeedFoam Air and this helps to promote optimal launch, distance and playability.

We found that both of these TaylorMade golf clubs can be used effectively off the tee, fairway and even the first cut of rough, so they are a very versatile club to have in your bag this season and beyond.

One of them also provided us with terrific levels of forgiveness on off-centre strikes, something we would not normally associate with a driving iron.

Watch our review of the new TaylorMade Stealth UDI and DHY below to see which one is right for your game:

"With Stealth UDI and DHY, we designed two different, yet similar options to provide versatility and forgiveness that can be a massive advantage for golfers in between their fairway woods and longest irons," says TaylorMade's director of product creation for irons, Matt Bovee.

"By incorporating SpeedFoam Air from our P·790 irons and re-imagining the shaping of both UDI and DHY, we created the opportunity for the everyday golfer to be able to rely on two different options at the top of the bag: Stealth UDI with a lower trajectory and more penetrating ball flight and Stealth DHY that flies a little higher and lands softer.

"With these products, golfers will be able to take flight in the ways that best suits their game and properly gap the top of their bags."

The ultimate blend of control and versatility, Stealth UDI is a powerful option from the tee or the turf.

Stealth UDI offers a traditional address view with Tour-inspired shaping, a narrower sole width (compared to DHY) and less offset than its predecessors.

It’s built to meet the eye of better ball strikers, but offers an enhanced level of forgiveness compared to standard long irons.

The weight placement on Stealth UDI is right behind impact, thus the centre of gravity (CG) has been positioned for a lower ball flight, while creating the spin required to shape shots.

The CG of Stealth UDI is comparable to that of P·790, but Stealth UDI has a wider sole for better playability.

Designed for power and forgiveness, Stealth DHY delivers a mid-to-low ball flight with distance properties that rival traditional hybrids in an iron-like profile.

The weight placement on Stealth DHY is positioned in the sole of the club creating a lower CG making it more playable and easier to launch than a traditional iron. That lower CG creates a higher launch than Stealth UDI giving players the option to choose the launch that best suits their game.