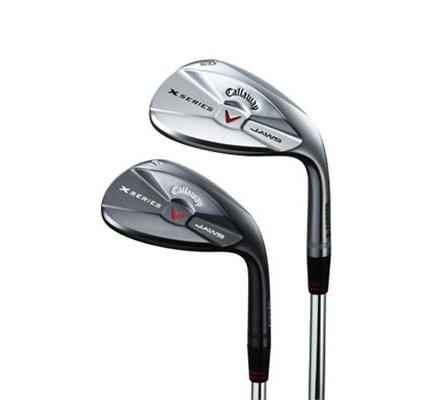 The new Rules of Golf on grooves for players on Tour have spawned a new range of wedges from several manufacturers - even though the new restrictions will not be felt by average club golfers until at least 2024. We've been checking them out on behalf of Golfmagic.com visitors who are maybe looking to take embrace the new rules ahead of their colleagues.

Despite the nod to Peter Benchley's classical shark tale, the teeth of these wedgeshave been blunted somewhat, though they do promise to offer some bite on the greens. Inspired by its Tour Authentic X-Prototype irons, the wedges have a fairly standard Tour wedge head shape, only the back of the head features an x-shaped muscleback spreading the weight to the top and the bottom of the clubhead.

At address, the clubhead sits nice and tight behind the ball, achieved by taking away material from the trailing edge of the sole to the heel, so that when the face is wide open it puts the leading edge very close to the ground, making it easy to lift the ball up from any lie.

Chrome finish is preferred by better players even though the overall look might be a little over-complicated for those used to more streamlined wedges. But you don't see the weighting system at address, so no harm done.

Callaway has taken the decision to give club golfers 12 more months to stock up on these X-Series Jaws wedges, which feature grooves that will be banned for all types of golf by 2024 but most mid-to-high handicappers won't notice the difference between conforming and non-conforming wedges (wrong angle of attack, limited clubhead speed).

If spin is your thing, then this could be the only new mainstream wedge on the market in 2010 that will be made featuring old-style grooves, so its spin rates should outstrip that of new wedges from other major brands.

The C Grind makes it extremely versatile from most lies and especially good from bunkers and heavy rough. The lower leading edge makes it relatively easy to nip the ball off tighter lies. Heavy, yet well balanced head feel and soft carbon face offers bags of feel on full and half-shots when using Tour standard ball. Checks up on crisply-struck shots with effortless backspin.

Lovely looking club, with meaty weight to it and will sit well with those who playing Callaway X-22 irons or similar. those playing more refined heads might be put off by the rather fussy clubhead.

Loft options are limited - there's no 50, 54 or 64-degree loft - and bounce angles should be taken with a pinch of salt, as the C grind sole reduces effective bounce. Callaway's first graphite shaft option in a specialist wedge will be welcomed by those with graphite-shafted irons