It's arguably the sexiest player iron the game has ever seen, but does performance match appearance? 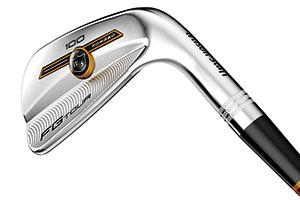 Celebrating the fact that Wilson has been incorporated as a sporting goods company since 1914, the Wilson Golf division of the Chicago-based brand has selected the FG Tour 100 - along with the new milled 8802 putter - to illustrate the game-changing innovation that helped to deliver a record 61 major titles.

Swinging freely away on the range with my own clubs trying to get in the zone for my upcoming round, I was interrupted mid-swing by the thud of a Wilson Staff Tour bag. I'm not sure where my 6-iron went but I think it went forwards.

I quickly forgave this Tour bag plonker for he happened to be my good friend and the PR guy treating me to 5-star hotel luxury and several rounds of golf in Turkish sunshine... I then forgave him some more because there happened to be several FG Tour 100 irons giving me the eye from the 6-way divider.

Placing one hand in the bag to pluck out a new shiny-shiny, Wilson Staff European Tour manager-turned-comedian Phil Bonham stopped me in my tracks and said: "Oh Andy, the Wilson D100s are in the other bag." Hilarious.

To be fair, he was right. FG Tour 100 irons are for players who can really golf their ball and I shouldn't have been going anywhere near them, unless I was looking to spread butter on toast.

But it wasn't just me getting all excited to pick up the FG Tour 100. When I was out at the PGA Show Demo Day in Orlando two months ago, I remember it being some sort of free-for-all. Every customer walking into the Wilson Staff booth was eager to stroke it, caress it, kiss it and take a few swings with it... I hasten to add without wanting to hit a ball.

From my recent testing session on the range at the stunning Sueno Dunes in Turkey, FG Tour 100 proved to me it's been designed with the feel player in mind. Someone who can nip the ball of the turf with precision. Someone who craves workability from a player iron. Someone who has all the shots up their sleeve. Someone who isn't called Andy Roberts.

Given I get paid to test new equipment, however, I thought it was only right to give the FG Tour 100 iron a go. It felt a bit like going to a really swanky nightclub but on couples night. It was fun to be getting involved but you knew you wouldn't be taking anyone home. Well, unlikely.

While I hit several decent shots with this iron on the grass range, when I didn't quite catch one out the middle, I pretended it didn't hurt. I might be a 7-handicap player, but I'm someway off upgrading to a set of these just yet. I could hit them alright, don't get me wrong, just not with the consistency that I could with the FG Tour M3 irons and brand new game improvement C100 irons.

Placing FG Tour 100 iron in the palm of my FJ Stasof and then placing it down at address, this iron appears classic in the sense of its better player design. It rivals the Mizuno MP-4 when it comes to the sex factor. The modern 3-piece button-back head, which harkens back to the legendary 1971 Dynapower blades, will simply take your breath away, as you can see from the images.

So what else is going on with the clubhead design? Well there's a Fluid Feel bore-through insert that has been paired with a milled face, scorelines and topline to provide the ultimate in consistency and feel for that better player. Throw in some vintage triple knurling on the hosel and a long, gold-red-gold ringed ferule, and it's easy to see why this club is a throwback to the iconic Wilson Staff Button Back model. The forged 8620 carbon steel and nickel-chrome plating combined with a high polish mirror finish completes the classy look.

Yet what I also love about this FG Tour 100 iron is the feel factor. This is hardly surprising because it's all part of Wilson Staff's F-C-D system, which sits at the forefront of everything this company has to offer in 2014. When I struck one out the middle, the ball did exactly what I'd expect. A lovely penetrating ball flight that held its line nicely and the 7-iron was easily traveling a good five yards further than my current setup. These irons really do kill a golf ball. Working the ball couldn't be easier, too, particularly keeping it low under the breeze. The standard True Temper Dynamic Gold shaft in stiff felt stable enough for my swing speed and was certainly a contributor to several nice, low, penetrating strikes.

Wilson insists better players or feel players should be looking more towards the FG Tour 100 and FG Tour M3 irons, while control players - someone like myself who can generate a little bit of spin on their ball - should be getting involved with the new C100 irons. Players seeking a little more distance and a little more forgiveness and help getting the ball airborne should be applying their trade with the D100 irons of 2013.

Expensive at 800 smackers but if you've got the game and want to impress your pals with a standout-looking blade, look no further than the new Wilson Staff FG Tour 100 iron. It screams elegance and screams class. It's a halo product for the brand and one that very much answers the prayers of every blade golf fan out there.