Bryson DeChambeau admits his hands are WRECKED ahead of Ryder Cup

The Scientist said it was daunting at first balancing Ryder Cup and long drive preparations, before questioning: "Why not go hard at life and do both?" 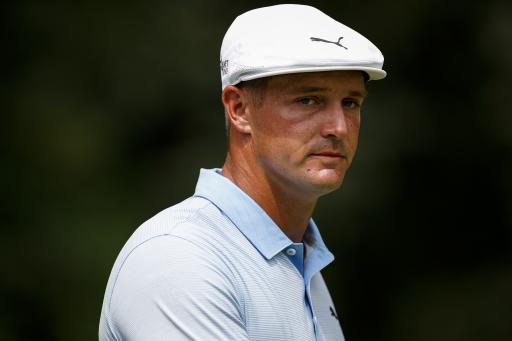 Bryson DeChambeau has admitted his hands are "wrecked" from long drive speed training days before the Ryder Cup.

The Scientist has been posting videos on social media of him achieving ridiculous ball and clubhead speeds in the last few days.

He's gearing up to take part in a long drive event a day after the conclusion of the Ryder Cup, which has raised eyebrows.

While he says he remains committed to his tour goals, the 27-year-old admitted he enjoys the one versus one aspect of long drive.

Clips of him smashing his Cobra King RadSpeed driver have been doing the rounds on social media.

We haven't got a picture, and DeChambeau hasn't posted anything about it, but he said he has now got a lot of calluses on his palms.

"My hands are wrecked from it," he told Golf.com

"In golf, it’s the one thing where you can judge your accomplishments by a number.

"Not necessarily by going out and playing golf, because you can catch a sprinkler head or catch a bad break or bad wind.

"On Flightscope, you can see the ball speed number.

"And when you obtain a ball speed number, it’s so different and unique.

"It’s like a shot-putter shot-putting a new record number. You’re trying to find that full potential to break through.”

Asked how he balances his training for long drive and Ryder Cup preparations he said he "does it every week".

He further told the publication: "Is it daunting? Hell yeah. At first, when I was trying to do it last year, it was very scary.

"But now that I’ve been through it and experienced the worst pains from it, and the most relaxed state of it where I’m not doing any speed training, I know how to kind of balance it — for the most part. Why not go hard at life and do both?"

NEXT PAGE: KOEPKA SAYS HE WILL BEAT TIGER'S MAJOR RECORD