Brooks Koepka on Tiger Woods: "I'm going to catch him on MAJOR WINS"

Brooks Koepka believes he can catch both Tiger Woods AND Jack Nicklaus on major wins. 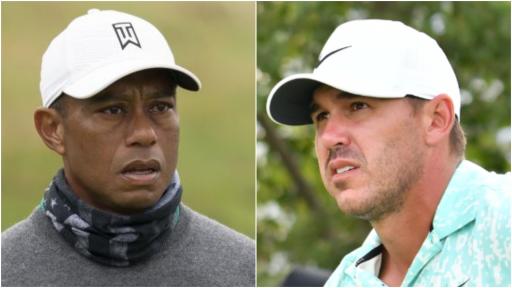 Brooks Koepka believes there is nothing to prevent him from catching Tiger Woods and Jack Nicklaus for major championship wins, following an incredible interview with Golf Digest.

The big-hitting American, who is currently nursing a wrist injury ahead of the Ryder Cup in two weeks time, made his feelings be known during a poolside interview with Golf Digest on Monday.

"In my mind, I’m going to catch him [Woods] on majors," Koepka told the publication.

"I believe that. I don’t see any reason that can stop me.

REVEALED: PREDICTED RYDER CUP PAIRINGS FOR THE FOURBALLS AND FOURSOMES

"People misconstrue that as being cocky. No, that’s just my belief. If I don’t have that belief, I shouldn’t be out there.

"If you don’t think you can win, why the hell are you teeing it up? Yeah, I’m just going for second place this week. There’s a lot of that on tour. Even elite players are very happy with that.

"Second? Sports are made to have a winner and a loser. You’re one or the other."

Koepka may be winless in the majors for two years now but he did bounce back with his first win on the PGA Tour in 18 months following a one-stroke victory at the Phoenix Open in February.