After making a sensational eagle at the first hole it didn't take long for Bryson to get back to indulging the crowd. 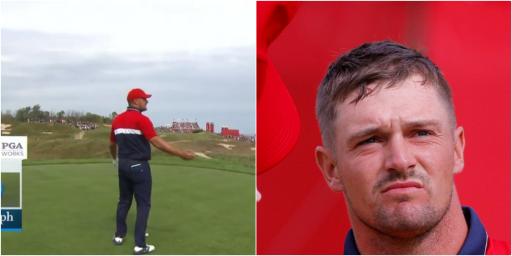 Moments after Bryson DeChambeau eagled the first hole in the singles after driving the green he was entertaining the crowd again.

DeChambeau bombed his first drive on the first tee, sending his ball more than 350 yards through the air to the heart of the green.

Of course, he made the eagle putt to take a one up lead over Sergio Garcia to stun the European and send his home fans into ecstasy.

It could be a defining moment for the career of DeChambeau who has won over the crowd this week partnered with Scottie Scheffler.

The United States were heading for a whitewash victory to reclaim the Ryder Cup when DeChambeau stood up to the par-4 6th.

With a 10mph wind slightly helping off the right, DeChambeau's caddie picked out his driver but the Scientist wasn't convinced.

He swapped the big stick for his 3-wood despite some boos from his home fans who wanted to see another bomb.

Ever the showman, the PGA Tour said on Twitter, DeChambeau thought he had too much club.

Looks can be deceiving.@B_DeChambeau gives the fans what they want ... with a 3-wood. pic.twitter.com/bwzgcHeA6D

This could be the moment Bryson’s life changed forever. pic.twitter.com/n5u3mZbNfP

Giving the crowd what they want! @b_dechambeau off to a fast start with an eagle on No. 1. @RyderCupUSA // #RyderCup

DeChambeau sent his 3-wood flying after a couple of practice swings and got it greenside.

Europe needed a sprinting start from the top of their order but it was far too pedestrian.

DeChambeau has enjoyed his week and was 4-under-par through 10 holes to take a commanding three hole lead over Garcia.

As soon as his Ryder Cup week is over he's going to compete in the Long Drive World Championships.