Rory McIlroy was extremely emotional after he beat Xander Schauffele in the Sunday singles to claw back a consolation point for Team Europe. 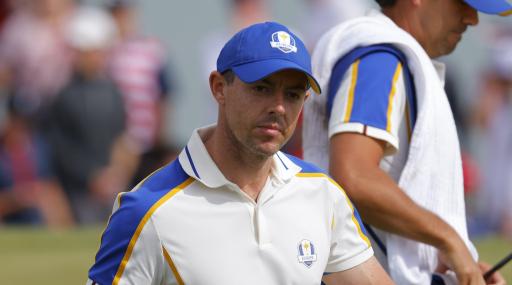 Rory McIlroy was moved to tears after he beat Xander Schauffele in the top match of the Sunday singles at the Ryder Cup, which is highly likely to be won by America by a large margin.

McIlroy failed to get a point for Team Europe on Friday and Saturday, but he brought his A-game to Whistling Straits on Sunday to beat Schauffele 3&2.

The four-time major champion made five birdies on his way to his first win in the Ryder Cup singles since 2014, but America now leads 13-6 and are one and a half points away from winning the trophy.

McIlroy was extremely emotional and visibly disappointed with his performance this week in Wisconsin, but he maintained his passion for the event.

"I love my team-mates so much and I should've done more for them this week."

An emotional Rory McIlroy reflects on ending his #RyderCup by winning a point for #TeamEurope in the Sunday singles. pic.twitter.com/3p7GY2bYJf

"I love being a part of this team, I love my teammates so much. I should've done more for them this week, I'm glad I put a point on the board for Europe today," said McIlroy.

"I can't wait to get another shot at this - it is by far the best experience in golf and I hope that little boys and girls aspire to play in this event or the Solheim Cup because there is nothing better than being a part of a team.

"Especially the bond that we have in Europe and no matter what happens after this, I'm proud of every single one of those players that played this week. I'm proud of our captains and our vice-captains.

"I wish I could have done a little more for the team. I am glad I got a point on the board today but it's been a tough week."

Europe entered the Sunday singles 11 - 5 behind America and it simply has not been Padraig Harrington's week.

NEXT PAGE: DOES THE RYDER CUP PROVE THAT GOLF HOODIES ARE HERE TO STAY?