Gimme putts controversy at the Ryder Cup: Bryson DeChambeau gets INVOLVED in row

Justin Thomas also was suitably unimpressed when his short putts were not being conceded. 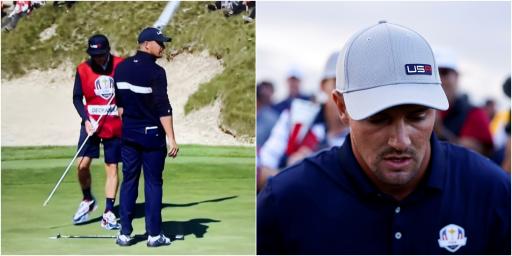 There appears to be a sportsmanship row brewing at the 43rd edition of the Ryder Cup at Whistling Straits.

And it's related to "gimme" putts that are not being conceded on both sides.

WATCH: GOLF FANS REACT TO BRYSON MOANING ABOUT NOT BEING CONCEDED A PUTT

Justin Thomas appeared miffed when his putt wasn't conceded despite appearing to be what is described as "inside the leather".

That refers to the length of the putter's shaft and out of courtesy they usually are conceded in this gentleman's game.

But the Americans did not concede Weswtood's putt of similar length a few holes earlier.

Thomas held out his putter horizontally to demonstrate to his European opponents they should have given him the putt.

Some fiery words were exchanged in the heat of the moment but it seems to be part and parcel of the Ryder Cup.

At least this is the opinion of Jon Rahm who spoke about the issue after Friday'a play.

Rahm told the media: "People are going to try and play mind games."

RELATED: WAS HARRINGTON RIGHT TO DROP RORY AT THE RYDER CUP?

Try that move in Scotland and you’ll be holing out every hole! @b_dechambeau #learnmatchplay pic.twitter.com/LKB3pjt60V

Now Bryson DeChambeau has got himself involved in all this pettiness.

He also placed the head of his putter in the hole to demonstrate he should have had his putt conceded.

Still, in that scenario, DeChambeau's armlock putter is longer than the average.

It doesn't look like any of these players will be winning the Nicklaus-Jacklin Award.

That award is to be given to one member of each team after the conclusion of play.

The name of the award is reference to The Concession, the most famous putt conceded in the tournament's history.

The Golden Bear gave Tony Jacklin a three-footer on the last hole of the 1969 Ryder Cup at Royal Birkdale.

Ryder Cup
Whistling Straits
bryson dechambeau
Justin Thomas
gimme putts
Jordan Spieth
Previous
And that's the BOTTOM LINE, cause JT says so: Thomas chugs beer at the Ryder Cup
Next
Bryson DeChambeau MOANS about not being conceded a putt at the Ryder Cup!