Does the Ryder Cup prove that golf hoodies are here to stay?

Collin Morikawa, Jordan Spieth and Justin Thomas have all worn hoodies at the Ryder Cup this week. 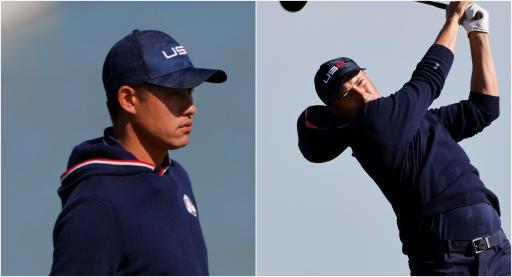 Golf hoodies have made their debut at the Ryder Cup in America this week, which could be a decisive week in their existence in the sport.

European players such as Tyrrell Hatton and Rory McIlroy have worn hoodies in the past on the PGA Tour in a new trend that has begun in recent years.

It is not uncommon now to see hoodies worn at professional tournaments, but this could be the biggest stage and the most coverage that the controversial piece of clothing has had so far.

The fact that I write this feature on golf hoodies may appear as critical and old-fashioned, but it is a significant movement in the dress code of golf.

As we all know, and maybe people outside of golf's bubble don't know, the sport is steeped in tradition and standards and the dress code is the first thing you must follow when you begin playing the game.

There will be many fans of a certain age and experience who think that hoodies have no place in the game, and they might be right because it is casual clothing.

But every sport, and many things in life, has to move with the times and hoodies could be a sign of the latest development in golf.

To be fair, they look very stylish and comfortable and it could be a good way for the game to engage with a new generation. The hoodie is usually worn in social activities, so the dress code is gravitating towards a style that suits everyday life.

They will continue to be worn, there is no question of that. Regardless of whether you like them or not, the Ryder Cup has proven that they are here to stay.

NEXT PAGE: WATCH: WWE STAR MANDY ROSE TEES IT UP AT THE RYDER CUP