Ian Poulter on Team USA: "Six of their guys will feel they have to deliver"

Poulter believes a lot of pressure will be on Team USA to deliver at the Ryder Cup. 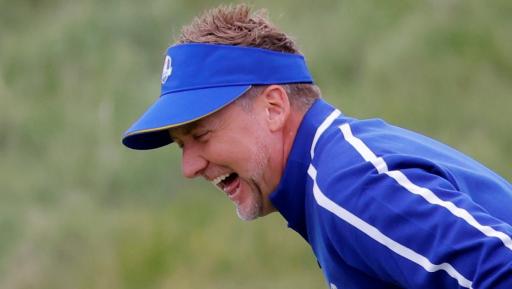 As a world leader in global supply chain solutions, DP World know how to smartly deliver at the right time, and in the right place.

As does their Global Golf Ambassador Ian Poulter who has built a staggering reputation for delivering on the world stage for Team Europe in the biennial Ryder Cup clash with the United States.

On the eve of another wildcard appearance, the Englishman, who is famously known as the postman – as the one who always delivers – spoke to sports broadcaster Andrew Cotter on his thoughts ahead of the 43rd Ryder Cup at Whistling Straits.

The Englishman spoke about his wildcard process with captain Padraig Harrington, the pressure being firmly on Team USA's six captain picks to deliver on home soil, his thoughts on whether Europe can retain the cup, and exactly why he gets so pumped up for it all.

On making the team

"I spoke to Paddy in March over dinner, and he made it apparent that he wanted me in the team. I’ve put myself on the board a number of times, it was nervy missing the cut at Wentworth but to finally get the call and be told you’re a big part of the team is great to have that level of confidence from your captain. When I think back to 2004, my first Ryder Cup and 17 years later and going for my seventh is incredible."

On the wildcard pick

"By waiting on a phone call and being a wildcard pick, it does put you under pressure and refocuses the mind to make you justify the pick. They have six picks so six of their guys will feel they have to deliver whereas we only have three guys."

On the chances for Team Europe

"I feel good about the European team, Paddy likes the combinations of foursomes and fourballs. We have a mix of players that are young, energetic who will be able to maybe play more than the older guys. It’s nice to lean on the experience of the older guys. I feel everyone played their way into the team, there aren’t any surprises. Everyone is doing their bit, I’m excited."

On playing on away soil / the US Fans

"We can’t just rely on looking left or right to get the crowd going from our fans, which is what we’ve done in the past to get us motivated and upbeat. We’ll have to feed off the energy in the crowd."

On differing his preparation depending on his playing partner

"I don’t mind who I play with, I’ve played with so many different players throughout my Ryder Cups. I’ve been the experienced player who has put his arm around a rookie in their first Ryder Cup and I’ve played with Rory, at the other end of the spectrum. I’m the type of player who can play with any other player."

On what makes the Ryder Cup so special

"It’s the team, I love being in a team and the team environment. I grew up playing football and enjoy being in the locker room. I love the interaction and having a laugh and a joke and that’s what we get in the Ryder Cup – the atmosphere in the locker room is incredible. It’s the buzz, its’s match play, it’s the Ryder Cup. It gets me pretty pumped."

On handling the pressure

"It’s a very different pressure to play under, it does funny things to people. You really have to embrace what happens in your mind, what happens in your body, you have to hit big shots at big times and you don’t need to second guess yourself, the what if game is a difficult game to play in those moments. You need to think about what it is you need to do and get excited to rev up the crowd."

On Team Europe being the underdogs

"We’re underdogs on paper and have been so for so many years. Their 12 guys are in the top 21 in the World Rankings, so on paper again they are favourites, they are on home soil and they have 99% of the fans there for the week and they are going to make it hard for us. We have won 5 of the last 6 and hopefully we can do another one."

Ian Poulter is a proud global ambassador for DP World, a leading enabler of smarter global trade. Find out more at dpworld.com