Jordan Spieth and Jon Rahm's caddie in BUST UP at the Ryder Cup! 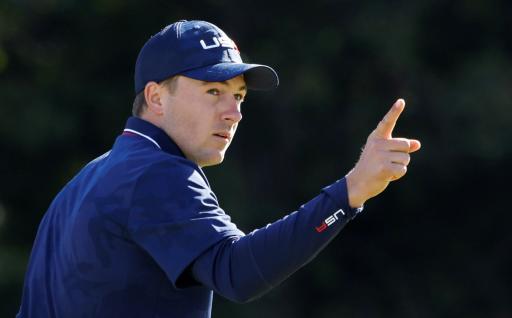 Jordan Spieth and Jon Rahm's caddie Adam Hayes were involved in an on-course bust up on day two at the Ryder Cup.

Spieth was sent out with Brooks Koepka in match two of the afternoon fourballs against in-form Spanish pair Jon Rahm and Sergio Garcia.

The heated debate between Spieth and Hayes came about over the location of Rahm's drop on the 5th hole having found the water off the tee.

Tensions are running high at the #RyderCup

While it's difficult to hear exactly what was being said by Spieth and Rahm's caddie, a couple of expletives can be observed.

Spieth is also overheard saying: "I never raised my voice at all, buddy. I came over and said what happened?"

The hole ended up being halved in pars.

Here's how a number of golf fans reacted to the heated debate between Spieth and Hayes:

"Rahm's caddie should have chinned him."

"I'm with Spieth here. Rahm's caddie was in the wrong."

"Jack and Tony would be proud of all this."

"If rules are being broken he has a right to question it?"

"Got to love Jordan's passion."

"Rahm's caddie should pipe down. Spieth entitled to question the drop if he wasn't sure where Rahm's drive crossed the hazard."