Bryson DeChambeau MOANS about not being conceded a putt at the Ryder Cup!

Golf fans react to Bryson DeChambeau's bizarre reaction on the green at the Ryder Cup. 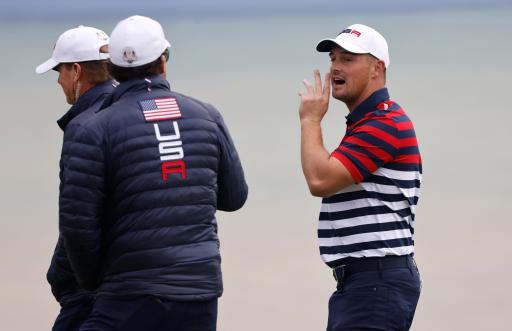 Bryson DeChambeau was once again involved in a moment of controversy after moaning about not being conceded a putt from inside of three feet on the opening green at the Ryder Cup.

DeChambeau is currently playing alongside Scottie Scheffler in the afternoon fourballs against Tommy Fleetwood and Viktor Hovland.

The big-hitting American sent his tee shot way left of the green at the reachable par-4 1st hole and then chipped onto the green to some 30 feet.

DeChambeau looked around to see if the putt was going to be conceded by Fleetwood or Hovland, but there was silence.

With winds gusting though in tricky afternoon conditions, did Team Europe really have any other option than to see the American send it home?

Let's just say we have seen that length of putt missed by a Tour pro, especially in the wind.

DeChambeau shook his head and then stepped in to hole his putt for a halve.

But not before lying his armlock putter on the ground, with the head of the putter resting in the cup.

DeChambeau turned around to Fleetwood and Hovland as if to say why have you not given me this putt?

His actions were greeted by cheers amongst the American crowds.

RELATED: BRYSON DECHAMBEAU INVOLVED IN YET MORE CONTROVERSY AT THE RYDER CUP!

But his act was also met with instant criticism by those in the Sky Sports commentary box.

Butch Harmon, Andrew Coltart, Nick Dougherty and Ewen Murray were all disgusted by what they had just seen.

Harmon, Tiger Woods' former long-time golf coach, said: "He was ridiculous. Classless is what it is."

Here's how a number of golf fans reacted on social media:

@b_dechambeau’s “inside the leather” toddler tantrum seems even more distasteful when one remembers that his putter practically comes up to his armpit! Come on @rydercupeurope

Dumb dumb Bryson doesn’t realize this makes no sense when your putter is 5 feet long pic.twitter.com/WPt30ENnQv

The wind is howling, “gimme putts” are not going to be fished out at every opportunity, Europe are down 9-3.

Between Bryson and Brooks today, the term classless is completely relevant.