Ryder Cup: Europe NEARLY down and out as US move to 11-5 ahead of Sunday singles

The Northern Irishman and the self-anointed Postman failed yet again to find their form for Europe. 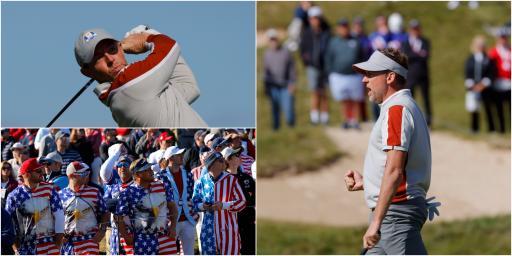 Ian Poulter and Rory McIlroy are still without a point for Europe as they fell to an 11-5 deficit at the Ryder Cup.

The Northern Irishman and the Postman were soundly beaten by the impeccable, undefeated Dustin Johnson and Collin Morikawa.

Former World No. 1 Johnson claimed his fourth point for the United States who look all but assured to win back the trophy.

Shane Lowry and Tyrrel Hatton claimed a stunning victory over Tony Finau and Harris English in the afternoon fourballs.

It means it will have to be an extremely special day for Europe needing nine points if they are to keep hold of the trophy.

"He just did what he is... he is just the number one," Garcia said of Rahm greenside.

When asked about their slim chances, he added: "Everybody knows one thing, we are going to be out there until the end."

Europe needed a response after failing to win a single session over the first two days' play.

There was a spirited fightback early on and Europe found a sea of blue on the scoreboard when so far all there has been is a wave of red.

That came in the form of Garcia and Rahm who lead by example again after claiming their sides sole point in the morning foursomes.

The Spaniards were up early against Koepka and Spieth who came roaring back just after the turn.

Rahm showed his true class and sank a lengthy birdie putt at the 16th from 30ft down the hill to go two in front.

Garcia was so surprised at his amigo he stood there in awe, beaming from ear to ear before warmly embracing his brother.

At one down Spieth had a putt to win the hole at the tricky par-3 12th but his birdie putt did a complete 360 around the hole.

Shane Lowry held a huge putt at the par-4 10th in a tense match against Finau and English.

His outburst of emotion showed at the time Harrington's men were not content to lie down without a fight.

His partner Hatton lit a spark for Europe at the par-4 11th, making a big birdie when his team needed him most.

For the most part Hatton struggled in the afternoon but held a long, snaking putt at 14 after English threw a dart.

Their match went down the 18th with the European pairing just one up.

But Hatton tugged his approach into the greenside bunker chunked it trying to get up and down to put the pressure squarely on Lowry.

The former Open champion was in trouble off the tee and somehow fashioned a par at 18 to claim the point.

He went absolutely bananas as his winning putt sank.

It was Lowry at his very, very best to go someway into proving his doubters wrong after Justin Rose wasn't picked.

Lowry said the week was "the best of my life" and dedicated his point to his mother on her birthday.

Poulter was back to his chest-thumping self early on and held big birdie putts early paired with McIlroy, who again struggled to buy a putt.

The Postman showed touches of class when saving pars from the sand traps but Morikawa and DJ always answered.

Morikawa has been a stone cold killer with the putter this week and showed why the US had the biggest day one lead since 1975.

So far in the Ryder Cup when the Europeans have played checkers the two-time major champion has played chess.

Poulter's approach danced around the flag from the fairway bunker at the 14th but Morikawa matched his birdie.

He and DJ went three up before the turn before eventually closing out Poulter and McIlroy 4&3.

RELATED: BRYSON MOANS ABOUT NOT BEING CONCEDED SMALL PUTT

Hovland was flanked by Fleetwood again in the third match.

The young Norwegian, 24, came through at the right moments to silence the crowd when Fleetwood struggled with the gusting winds.

DeChambeau and Scheffler battled all afternoon in a tight affair dogged by pettiness over gimme-length putts.

DeChambeau came up clutch at the 14th, holing out for birdie as Fleetwood and Hovland failed to respond sending their match to the wire.

The American crowd erupted as Scheffler's birdie putt crept in at the 15th from 18ft to take them up by one.

And they closed out the match at 17, setting up the Americans nicely for what should be a quick victory.

It was a fighting performance from Europe, but it may be too little too late.

The sunday singles will be revealed shortly.

NEXT PAGE: KOEPKA CURSES AT REFEREE OVER RELIEF RULING

Ryder Cup
Whistling Straits
Ian Poulter
Rory McIlroy
bryson dechambeau
brooks koepka
Previous
Jordan Spieth and Jon Rahm's caddie in BUST UP at the Ryder Cup!
Next
Ryder Cup 2020 VERDICT: "This is the GREATEST US Ryder Cup side of all time"