Henrik Stenson pipped Paul Lawrie to the post as European Ryder Cup captain, and there has been plenty of reaction on social media. 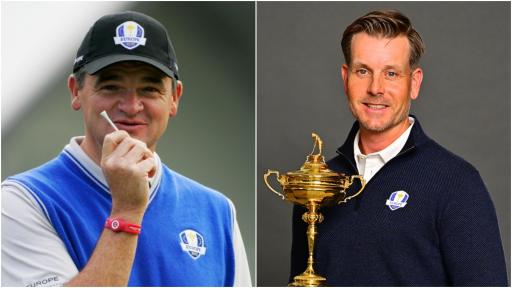 Golf fans have been reacting to this week's news that Henrik Stenson has been named the 2023 European Ryder Cup captain.

While Stenson seems a popular choice with the majority of European golf fans, there are still plenty who believe 1999 Open champion Paul Lawrie deserved to have been given the reins for Rome.

Some believe Luke Donald was wrongly denied his chance, too.

Sky Sports Golf's Ewen Murray was particularly vocal about seeing his Scottish compatriot Lawrie bypassed for the role as he took to Twitter on Monday afternoon.

Murray took speicifc aim at Stenson's links with a Saudi-backed golf league run by Greg Norman at the start of the year.

Lawrie, who is particularly active on Twitter, was understandably disappointed by the captaincy snub.

But it was nothing a can of Chippie could not soften the blow.

The eight-time European Tour winner then responded to a number of comments from his followers.

Some nice, some not so much.

Lawrie has had some fun with his replies, regardless.

Thank you Gil it’s nice to be on that list. https://t.co/2AUpQLhzZp

One golf fan wrote: "In no particular order…..Poulter, Westwood, Donald, Garcia, McDowell & Rose would all be captains before Lawrie. That’s a fact."

Lawrie could not help himself with a response.

"Thank you Gil it’s nice to be on that list," tweeted Lawrie.

Lawrie also appreciated the fact Stenson had raised him on Ryder Cup appearances:

The United States won the 2020 Ryder Cup by a record-breaking 19-9 scoreline when it was staged at Whistling Straits last year.

Is Henrik Stenson the right man to help Europe win back the Ryder Cup in Rome in 18 months' time? Should Paul Lawrie or Luke Donald have been given the captaincy instead? Share your thoughts over on the GolfMagic social media channels.