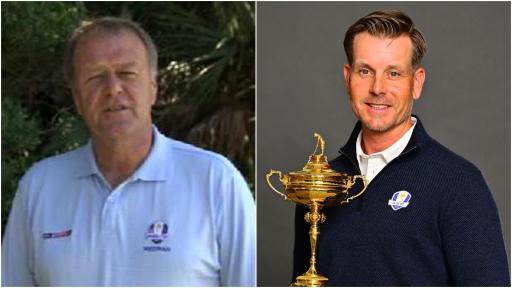 Sky Sports Golf's long-time lead commentator Ewen Murray has hit out at the appointment of Henrik Stenson as the next European Ryder Cup captain due to his apparent links with a new Saudi Golf League.

Stenson, 45, was reportedly given an ultimatum at the start of the year as to whether he would be sticking with the DP World Tour, formerly the European Tour, or moving over to a new Saudi-backed golf super league led by Greg Norman.

It is understood that Stenson had been offered in the region of $30 million to join the league.

I am extremely proud and humbled to be @RyderCupEurope’s next captain. Rome, here we come! #RyderCup #TeamEurope pic.twitter.com/cWeE18qYHh

But after officially being named the 2023 European Ryder Cup captain on Tuesday afternoon, it would now seem that deal is completely off the table and his efforts are now fully fixated on helping Europe win back the Ryder Cup in 18 months time.

Stenson was asked by the media as to where he now stood with those running a Saudi-backed golf super league, and the Swede quickly knocked things on the head.

"There has been a lot of speculation back and forth," said Stenson, who becomes Sweden's first-ever Ryder Cup captain.

"Yes, the captain signs a contract. He is the only one who does that; players and vice-captains don't but the captain has an agreement and those agreements are between Ryder Cup Europe and the captain.

"I am fully committed to the captaincy, Ryder Cup Europe and the job at hand so we are going to keep busy with that and I'm going to do everything in my power to deliver a winning team in Rome."

Stenson, who was picked ahead of the likes of Luke Donald, Robert Karlsson and Paul Lawrie for the captaincy in Rome, has plenty of Ryder Cup experience having represented Europe five times.

The former Open champion has been on the winning Ryder Cup side three times, and he was also a vice captain at Whistling Straits last year when the United States thrashed Europe in a record-breaking 19-9 scoreline.

But while many European golf pundits are pleased with the appointment of Stenson, there is an element of scepticism with some.

None more so than Sky Sports Golf's Murray, who while wishing Stenson the very best as captain, is a little confused about the appointment given his ties to the Saudi Golf League at least at the start of the year.

In the eyes of Murray, his fellow Scot Lawrie, 53, would have been his preferred choice as captain.

"I wish Henrik well, but his links with Saudi doesn't fit with DP World team who have moved heaven on earth to have their players playing in difficult times?"

Telegraph golf correspondent James Corrigan replied: "But Henrik has now committed not to play in the SGL [Saudi Golf League], Ewen. He's always kept his ET [European Tour] card. I think even Paul Lawrie might have listened to the Saudis at those prices."

Murray, 67, then confirmed that was not the case, but wished Stenson the very best in his new role.

"No he didn't," tweeted Murray. "But yes, I like Henrik and wish him and Europe the best. Time for the young boys to step up to the plate."

No he didn’t. But yes, I like Henrik and wish him and Europe the best. Time for the young boys to step up to the plate.

Murray did not stop there as he responded to a number of tweets put forward to him about the Ryder Cup captaincy.

"In the current climate, I would have chosen Paul [Lawrie] as captain," Murray replied to one golf fan.

That’s silly. I’m not nationalistic, although I adore my homeland. What you’re saying is, the Saudi tour was no threat to the tour several players have made their career on? Why would anyone want to play on the Saudi Tour? One answer. If money means that much, then go.

Nationalistic? Did I read that wrong? Nothing to do with Scotland. It does however have much to do with an Open Champion the game is proud of. One who has given so much to many. Charity, Boys, girls, women and men. All I’m saying is, Paul Lawrie, should have been a contender.?

In the current climate, I would have chosen Paul as captain, Sandy, Robert, and Luke as VC’s. It’s nothing to do with being nationalistic. I don’t normally give opinions. Having nothing against Henrik, it’s only my thoughts. Nothing more.

Think? Unlike you, and I respect all opinions as I should, Saudi just doesn’t do it for me. It’s not my scene. I never mentioned the country. But, I respect your comment and accept you’re ok with it.

In one particular tweet, Murray wrote: "Paul would have been an outstanding captain. Many who know him would endorse that.

"Others who look at 'media names', wouldn't understand it. Paul is an exceptional player, leader and person.

"More than that he's European through and through. I wish Henrik well tho'."

In another tweet, Murray said: "Saudi just doesn't do it for me. It's not my scene."

It's fair to say Lawrie himself was a bit gutted about not receiving the nod, at least judging by one of his latest tweets.

What do you make of the appointment of Henrik Stenson? The right call or did Paul Lawrie, Luke Donald or Robert Karlsson deserve it? Share your thoughts over on the GolfMagic social media channels now.