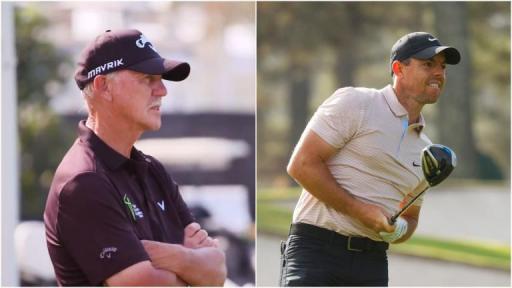 The accusations the Americans don't care enough about the forthcoming Ryder Cup were bound to happen.

It's like clockwork every time the biennial event comes around, suggesting the Europeans are more of a team.

It's a big reason for their success as players like Sergio Garcia and Padraig Harrington put aside their issues and focus on winning.

And this year is no different, with bad blood accusations swirling around the US camp.

It remains to be seen who will partner Bryson DeChambeau.

The best drives from the leader in Driving Distance. pic.twitter.com/HMFv1zM09t

The aspiring long drive pro seems to have taken up the mantle as the controversial player in Patrick Reed's absence.

But one man who thinks it's ludicrous to suggest the Americans don't care enough is Pete Cowen.

The swing coach gave an interview to The Times recently, and revealed his thoughts about who he thinks will win at Whistling Straits.

"It’s rubbish to say the Americans don’t care," he told the newspaper.

"They just haven’t played as well as the Europeans. Brooks wants to be the best in the world every time he plays.

"He’s an unbelievably strong character, mentally as well as physically."

Asked how he sees the Ryder Cup shaping up, Cowen said: "We’ve been underdogs that many times.

"We were going to get hammered in France.

"We were going to get hammered at Medinah. Never happened.

"The worst one was Hazeltine but that was closer than you think.

"If Westy holes that putt on the 18th in the four-balls on Saturday afternoon it changes perceptions.

"We like to play foursomes. The Americans notoriously don’t.

"In four-balls any of our players can hit ten birdies in a round, like Nicolas Colsaerts did at Medinah.

"For me it’s the toss of a coin. It’s matchplay over 18 holes. You can have a bad day and get beat.

"It’s on the conditions and how they set it up.

"If the wind gets up we have no problem with crap weather; if it’s wide open and flat calm you’d have to say the Americans are favourites."

NEXT PAGE: WILL RORY MCILROY LEAD TEAM EUROPE TO VICTORY?