Will Rory McIlroy LEAD Europe to victory at the Ryder Cup at Whistling Straits? 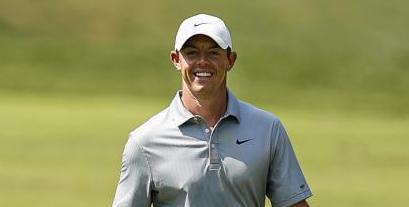 Will the real Rory McIlroy please stand up?

Granted, he only has four chances a year - and clearly he has the game to win multiple majors over his career.

But something just isn't quite right about Rors - and I think even he knows it.

If Europe are to win against the odds in Wisconsin, then McIlroy needs to rediscover his love for the game after an exhausting few years.

The four-time major champion has had a handful of opportunities over the last few seasons to finally grab another big title.

Only to squander his chances by either starting too slowly or throwing silly shots away at crucial moments.

Now, the European talisman, 32, heads to Whistling Straits with massive pressure on his shoulders.

This is a new-look side, headed by Padraig Harrington, and he will need to lead from the front.

McIlroy made his Ryder Cup debut in 2010 and heads to Whistling Straits looking to be on the winning side for a fifth time.

Overall, he has played in 24 matches, winning on 11 occasions.

That only defeat in the singles came after Justin Thomas won on the 18th at Le Golf National when Rors' tee shot got plugged in the sand.

McIlroy does seem to have found some form of late, though.

RELATED: WHICH US ROOKIE WILL SHINE BRIGHTEST AT RYDER CUP?

I was reading an article the other day about the newly-crowned US Open tennis champion Emma Raducanu.

In it, columnist for The Times Matthew Syed observed how he hopes money, fame and fortune doesn't corrupt the young Brit.

He observed he thought he saw a change in McIlroy after he announced his $100m Nike deal a few years ago.

In that press conference in the Far East he started referring to himself as a brand.

"The boy who had once bounced around the course like Tigger had become a corporate man," he wrote.

I can't help but agree to there being a grain of truth in this.

The Ryder Cup is where we see Rory playing with the freedom that he struggles to show when he plays on the PGA Tour.

That fire and passion he displayed when he hit miracle shots or drained impossible putts teamed with Ian Poulter needs to return.

I like the fact he decided to skip the BMW PGA Championship at Wentworth to rest up and recuperate.

Tiger Woods can attest to the fact if you take time away from the game you don't immediately forget how to chip and putt.

Here's to hoping Rors is revved up and raring to go.

That's if Europe is to have any hope.

NEXT PAGE: POULTER DISTRACTED BY US FANS IN RYDER CUP PRACTICE