Kevin Na lets slip that Tiger Woods will be the 2022 US Ryder Cup captain... 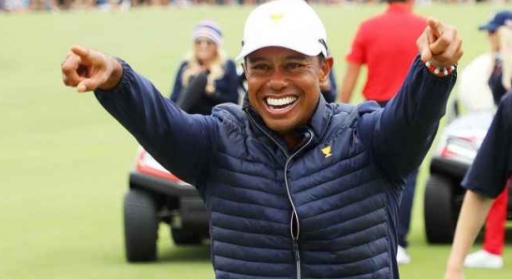 Tiger Woods is likely to captain the 2022 United States Ryder Cup team in Italy, according to PGA Tour pro Kevin Na during a Sky Sports interview.

Na, who will be defending his title when the PGA Tour returns at the Charles Schwab Challenge on June 11, revealed it was his dream to play his way into a first ever US Ryder Cup side, before letting the cat out the bag.

"My goal is to make the Ryder Cup team this year, and I know the following Ryder Cup is in Italy and the captain I believe is Tiger Woods, so that's another thing that I'm looking forward to," said Na.

After realising he probably should not have made such a comment, the World No.30 went back on his word slightly.

"I heard rumours... am I starting a rumour? That's what I heard... am I not supposed to say anything? I don't know, I've heard rumours! I won't tell you who I heard them from, but it wasn't from him. It was from one of his friends!"

Should Woods officially be named 2022 US Ryder Cup captain, it would mark his first time as a Ryder Cup captain and his second time as captain following his player-captain role at last year's Presidents Cup.

Na is still eager to play his way into Steve Stricker's 2020 US Ryder Cup side, should it still go ahead this September.

Many players have turned their noses away at a Ryder Cup behind closed doors, but Na would relish the opportunity.

"It's still an honour, you're still playing for your country, the whole world is watching. Yes, you wouldn't have that same atmosphere and the atmosphere at a Ryder Cup is just extraordinary, but I would still be honoured to play.

"That said, pushing it to 2021 isn't actually a bad idea. We can get the fans going and we can have back-to-back years of Ryder Cup, that would be very cool."

Woods teamed up with Peyton Manning to defeat Phil Mickelson and Tom Brady in a charity match on Sunday night, which raised $20 million for coronavirus relief efforts in the United States.