Is Steve Stricker under MORE pressure than anyone to deliver Ryder Cup victory?

More wildcard picks than anyone before. Heavy favourites. Hometown course. There is A LOT of expectation on Strick. 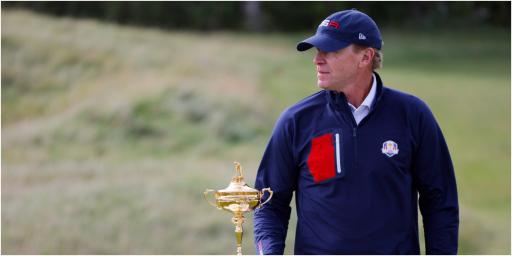 There's an upset brewing in the winds at Whistling Straits.

At least this is what Steve Stricker will be hoping won't happen when he leads the American side into the 43rd edition of the Ryder Cup.

This is perhaps the strongest side ever on paper with a team of champions and talent that belie their young years.

They are heavy favourites with many bookmakers making them as short as 1/2 to win back the trophy on home soil on the Straits.

It is a young team, the youngest side ever for the Americans but it still begs the question: how much pressure is Stricker under?

#TeamUSA captain Steve Stricker says the feud between Brooks Koepka and Bryson DeChambeau will not be an issue, but they may not play together at the #RyderCup.pic.twitter.com/klJenrEX0h

The answer? An awful lot.

There is the experience and unwavering mettle of the Europeans that is countered by youth and exhuberance.

Has Stricker, 54, made the right call?

You look at the American side and it's strong all the way down, whereas the Europeans look considerably weaker.

The U.S is going for its third win in four tries on their home turf.

And it's Stricker's home turf too, he's from Wisconsin and carries the weight of a nation on his shoulders.

Make no mistake, this is his side.

One that he has been constructing quietly over the past 18 months.

When he announced his six picks, it was interesting to hear the comments from some of the younger guys.

Particularly the likes of Daniel Berger and Jordan Spieth.

These young kids have already played under Stricker at the Presidents Cup in 2017.

Their comments suggested a great deal of unity that has rarely been seen in previous Ryder Cups.

What makes Stricker stand out differently to previous captains is just how much control he's had over picking this team.

More wildcard picks than anyone else.

That is to say - there really are no excuses.

Then there is the course and the set-up.

Graeme McDowell has already suggest on his social media channels this feels like an Open course with its conditions.

We know how well the Americans like those, don't we?

Crazy windy practice day here at #WhistlingStraits. Will be interesting at end of the week if there’s any regret about playing this American @rydercup in Scotland…wait…what? You know what I mean... Feels like @TheOpen out there. Love it for @RyderCupEurope

A few years ago PGA Tour pros were polled on who they thought the nicest guy on the circuit was.

Stricker was the runaway winner.

But Strick - as he is called by close friend and confidante Tiger Woods - must know that being a nice guy won't get you anywhere.

At least not in the Ryder Cup.

He's got to be ruthless.

Stricker seen both sides of the coin having won once and lost twice as a player, most memorably the crushing defeat at Medinah.

These experiences will undoubtedly shape him when he makes decisions over the weekend.

NEXT PAGE: IS JT WEARING THE GREATEST PAIR OF RYDER CUP SHOES?