WATCH: Ian Poulter MOCKED by US fans on the 1st Tee at the Ryder Cup!

Poulter rips his drive down the middle of the fairway after being told by a fan he bought his outfit from the grocery store! 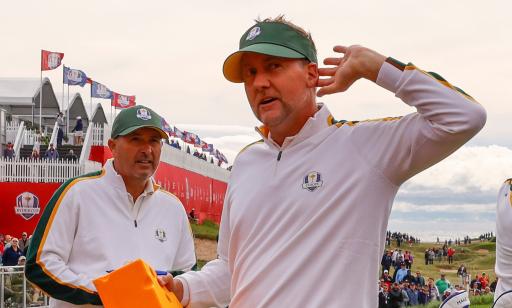 If you think you can mock Ian Poulter on the 1st tee and expect to put him off his game, you might want to think again.

The man aptly named as 'The Postman' - for more often than not delivering a point for Team Europe - felt the full force of the American fans at Whistling Straits as he set out for his Wednesday Practice Round alongside Rory McIlroy.

It may have been one of the worst heckles of all time, but Poulter dealt with it in his stride and ripped a drive straight down the middle of the fairway before turning to the crowd with his hand to his ear.

"It looks like you bought that outfit at the grocery store," shouted one US fan.

Team Europe vice captain Luke Donald took a video of the moment and Poulter then posted it on his Instagram page earlier today with the caption: "First tee at the Ryder Cup. It should be illegal to have this much fun."

Team Europe sported the colours of local NFL side Green Bay Packers in Wisconsin on Wednesday.

They also came out onto the 1st tee wearing cheeseheads to try and get on the right side of the American fans.

Poulter has an enviable record at the Ryder Cup record at 14-6-2 (W-L-H), but most impressively, he has never lost a Singles match at 5-0-1.

The fiery Englishman is expected to partner up with McIlroy at some stage in the foursomes or fourballs this week.

There has been talk that Harrington will stick Poulter out with one of the rookies too, which could mean he partners up with Bernd Wiesberger, Shane Lowry or Viktor Hovland - but we will just have to wait and see.

NEXT PAGE: JUSTIN THOMAS IS ROCKING THE SNAZZIEST PAIR OF US RYDER CUP SHOES WE HAVE EVER SEEN!