Henrik Stenson has named Thomas Bjørn as his first Vice Captain for the 2023 Ryder Cup which will be played at Marco Simone Golf and Country Club in Rome, Italy from September 25 – October 1, 2023. 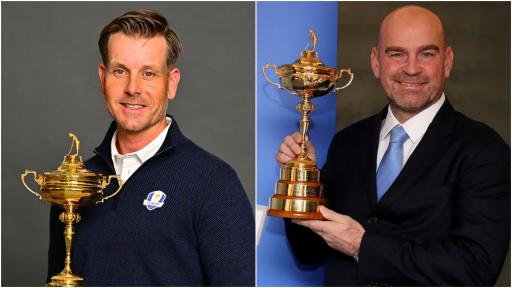 Henrik Stenson has named Thomas Bjørn as his first Vice Captain for the 2023 Ryder Cup which will be played at Marco Simone Golf and Country Club in Rome, Italy from September 25 – October 1, 2023.

Dane Bjørn will bring a wealth of experience to the role having been part of Team Europe in eight previous editions of the biennial contest – three as a player, four as a Vice Captain and as victorious Captain in the last ‘home’ Ryder Cup in Paris in 2018.

Stenson was one of Bjørn’s 12 players in that successful team at Le Golf National and the Swede has now confirmed his fellow Scandinavian as his first official appointment since he was unveiled as European Captain on March 15.

“I have known Thomas for my whole career,” said Stenson. “I trust him implicitly and I know any advice he will give me will be honest and direct. He will not simply tell me what he thinks I want to hear and that will be important, so I’m delighted to have him as my first Vice Captain for Rome.

“Since the match itself is still over a year away, I know I am going to have a lot of conversations with him about all elements of the Ryder Cup from his experience, both as a Vice Captain on previous occasions but also, obviously, as the Captain in 2018 when we had a great result. I will be depending on him a lot and I’m really looking forward to those chats.

“He was very happy when I asked him. He was very honoured to be asked and happy to be part of Team Europe again and part of the journey with the players.”

I thought my @RyderCupEurope story may have concluded in Paris but, once @henrikstenson took charge, I knew I had another chapter left in me! I’m honoured to be Henrik’s VC and I’ll do all I can to support him and his team. Time to get to work and bring that trophy home! https://t.co/2v03ep3U9T

Bjørn said: “I’m delighted to be part of the whole Ryder Cup experience once again. I probably thought that after 2018 that was it for me, but Henrik called me to talk about Captaincy in general and that led into him asking me if I wanted to do another stint as Vice Captain, which I agreed to. I’m excited to work with him.

“I think I can help Henrik outline what he wants to do with his Captaincy going forwards. I can keep asking him the right questions and reminding him of things that are going to come his way that he might not have thought about. I will help him prepare in the best possible way and as we get closer to the match, to be an additional support to the players.

“I think Henrik will be a fantastic Captain. He is so well respected by players and by everyone in the game. He is a very hard-working golfer and somebody who is true to himself, and his team will represent that. He has a great sense of humour that the players will take to, and he is very well liked across the whole Tour, not just the top where he has played his golf for so many years.”

Bjørn’s Ryder Cup career began under Seve Ballesteros in 1997 when he became the first Dane to represent Europe and Valderrama became the first course in continental Europe to host the contest. He won one-and-a-half points from his two matches in Spain, partnering Ian Woosnam to defeat Justin Leonard and Brad Faxon in the fourballs, and then halving with Leonard in the singles.

He then contributed two points from his four matches at The Belfry in 2002, teaming up with Darren Clarke to defeat Tiger Woods and Paul Azinger in the fourballs, and beating Stewart Cink 2&1 in the singles.

His third appearance as a player came 12 years later when he qualified for Paul McGinley’s team at Gleneagles in 2014, where he partnered Martin Kaymer to earn half a point against Rickie Fowler and Jimmy Walker in the Friday fourballs.

Bjørn was also part of Team Europe’s backroom team on three occasions in between those playing appearances, firstly as Vice Captain to Bernhard Langer at Oakland Hills in 2004, then Colin Montgomerie at The Celtic Manor Resort in 2010 and José María Olazábal at Medinah in 2012.

After playing in the 2014 victory in Gleneagles, he then returned to the role of Vice Captain under Darren Clarke in 2016, experiencing his only defeat to date in the Ryder Cup arena at Hazeltine National.
Bjørn, who has won 15 times on the DP World Tour to date, was then selected as the European Captain in 2018 as Le Golf National, in Paris, became the second venue in continental Europe to host the Ryder Cup.

He oversaw a comprehensive 17½-10½ victory in France, with Stenson’s contributing three points from his three matches as Europe extended its unbeaten home record to six consecutive editions dating back to Bjørn’s debut in 1997.

Bjørn will now be part of Captain Stenson’s support team at Marco Simone when Italy hosts the Ryder Cup for the first time.

Team Europe will be seeking to regain the Ryder Cup against the United States team which will be led by Zach Johnson, who has named Steve Stricker, the victorious 2020 US Captain, as his own first Vice Captain.