Tiger Woods is said to have not held back in his message to Team USA prior to their record-breaking victory over Europe at the Ryder Cup. 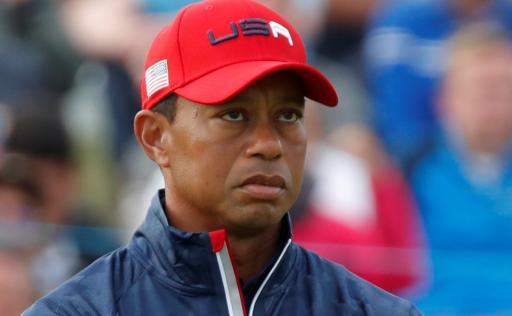 Tiger Woods reportedly sent a message to Steve Stricker's United States Ryder Cup side that read "step on their necks" prior to their record-breaking 19-9 victory over Padraig Harrington's European team.

Woods is said to have played a key role as backroom staff at Team USA before and during the action at Whistling Straits, despite not being on site as he continues to recover from leg injuries sustained during his horror car crash in Los Angeles back in February.

With the score 11-5 in favour of the home side heading into the 12 Sunday Singles matches, Woods, according to reports, sent a group message to the players telling them to "step on their necks".

Woods was enlisted as an unofficial vice-captain for the Ryder Cup.

The 15-time major champion was also the man responsible for telling Team USA to go out and make history on Sunday.

"We were told by a member of the team today that the record was 19 points and that we should go out and try to get to 19 points," Jordan Spieth said in Team USA's post Ryder Cup press conference.

Prior to Team USA's 19-9 record-breaking victory over Team Europe on Sunday, the record had stood at 18.5-9.5 in the modern era of the Ryder Cup dating back to 1979, when Team Europe was formed to face Team USA.

Woods tweeted a message of congratulations to Team USA just seconds after the record scoreline had been confirmed.

With the score at 18-9 heading up the final hole of the final game, Daniel Berger entered Team USA into the record books when Matt Fitzpatrick chunked his second shot into the water to hand Berger the hole and 1up victory with a par.

NEXT PAGE: JORDAN SPIETH'S PUTTER STROP IS SOMETHING WE CAN ALL RELATE TO - WATCH THIS!