Ian Poulter prepared for the Ryder Cup in the only way he knows how: through the medium of dance... 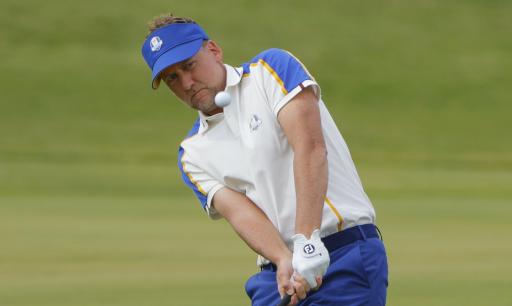 Ian Poulter was his jovial and outgoing self during the build-up to the Ryder Cup and he thought of a new way to approach the first tee at Whistling Straits.

The Englishman has entertained golf fans all over the world for many years, especially European fans when the Ryder Cup comes around.

The European team took a relaxed approach to their preparation for the event and they aimed to engage with the US crowd by wearing cheesehead caps, to honour the rich history of cheese production in Wisconsin.

They also wore fleeces that included the green and yellow colours of the Green Bay Packers, who are an American football team based in the famous state.

The Postman wanted to go a step further with his endearment to the crowd, so he posted a video on his Instagram page of him dancing his way to the first tee box.

As he strutted along to 'Push It' by Salt-N-Pepa, he keeps a very straight face, the same face he shows when he is in the thick of battle at the Ryder Cup.

He jigs all the way underneath one of the grandstands, and past various people who look on in bewilderment. Unfortunately, we did not get to see Poulter's dance in action on the competition days.

It turned out to be a humbling experience for the 45-year-old and his teammates, as Team USA performed incredibly throughout the three-day event to destroy Europe 19-9.

Poulter was only able to deliver one point himself, which came in the form of a 3&2 victory over Tony Finau in the Sunday singles.

As a consolation, Poulter was able to maintain his unbeaten record in the final-day discipline, a record which now stands at 6 wins and one half.

NEXT PAGE: BRYSON DECHAMBEAU GEARS UP FOR HIS WORLD LONG DRIVE CHAMPIONSHIP DEBUT!