Jordan Spieth's Ryder Cup putter STROP - We can all relate to this!

This is a putting green tantrum that we can all relate to, even if it was a three-time major winner in the video... 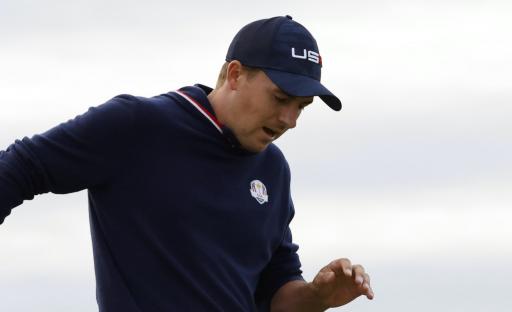 If there is one part of the game of golf that you associate with Jordan Spieth, it would have to be his putting.

On his way to picking up 12 PGA Tour victories and three major championships, Spieth's short stick has been the key to victory. When he is on form, there is no better putter in golf.

When he won The Open Championship in 2017 at Royal Birkdale, his 48-foot eagle putt on the 15th hole is one of the most iconic shots in the recent history of the tournament.

This epitomised his form at the time, but even the best putters on the PGA Tour have off-days and this was the case during the Ryder Cup at Whistling Straits.

On the 4th hole at the Wisconsin venue, the 28-year-old was frustrated walking off the green and he had a strop that can only be compared to the usual Sunday morning golfer.

He swung his putter at his ball, presumably to hit his ball a significant distance away so that he would lose it in annoyance, but he miscued the shot.

The ball skewed away behind him and I will speak for a lot of golfers when I say that I have embarrassed myself doing this exact thing, and it does nothing to calm you down either.

You want a satisfying connection from your putter on to the ball to hit it away, but Spieth couldn't manage this and the ball didn't even leave the green.

Spieth ended up tying his singles match with Tommy Fleetwood in what was an intriguing battle. His half-point contributed to Team USA's record-breaking 19-9 win.

The man from Dallas earned 1.5 points throughout the week at the Ryder Cup, but it seems he needs to work on his putter volleys to avoid embarrassing himself again.