WATCH: The GREATEST European song of all time at a Ryder Cup! THIS WAS EPIC!

Rory McIlroy and Ian Poulter feature in one of the greatest golf songs of all time at the Ryder Cup! 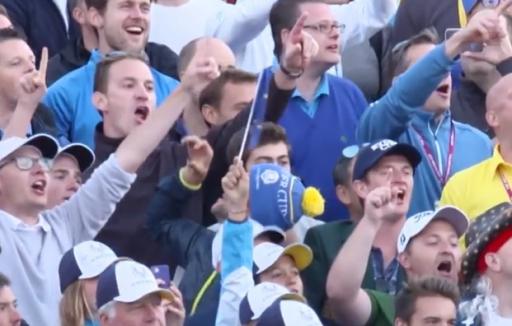 While most American fans will want to forget about the last renewal three long years ago at Le Golf National, many Europeans look back with fondness as Thomas Bjorn's men strode out comfortable 17.5-10.5 winners.

The Big Dane's pairings were spot on for the fourballs and foursomes, especially with Tommy Fleetwood and Francesco Molinari teaming up to win each of their matches, and the Sunday singles resulted in a sea of blue.

The fans also played their part with one of the greatest atmospheres Team Europe has possibly ever experienced out in Paris.

While a number of different European songs were belted out by home fans on the Albatros Course, the best one came on the first tee in the very first match... although judging by his reaction we're not sure Brooks Koepka was much of a fan!

We might need to change the lyrics to fit Padraig Harrington's name this time around, but either way, what a song! We bet you watch this one a fair few times.

NEXT PAGE: TIGER WOODS TO GIVE A MOTIVATIONAL SPEECH FOR TEAM USA AHEAD OF THE RYDER CUP