Ryder Cup: How to watch and a 101 guide to the 43rd edition at Whistling Straits

How does it work? Where can I watch the Ryder Cup? What is the format? This is your guide. 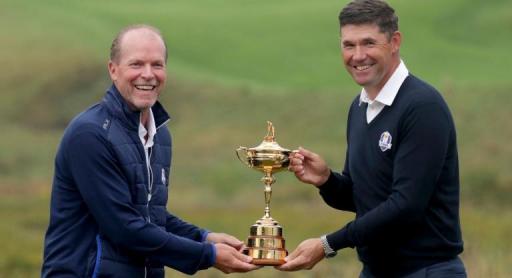 After a one-year delay thanks to the global pandemic, the Ryder Cup is nearly upon us.

Here at GolfMagic, we thought we'd take you through exactly what is scheduled to happen and give you the lowdown on some basics.

The Ryder in Ryder Cup is the surname of the English businessman who conceived the idea for the tournament.

Samuel Ryder took up the game at aged 50 and began sponsoring various tournaments.

During that period in the 1920s the biggest rivalry was naturally the English versus the Americans.

Ryder donated the trophy for the tournament.

It was orignally the United States against Great Britain and Ireland for 39 years, but was changed to Europe in 1979.

This was to make it more competitive as the Americans nearly always won and so Seve Ballesteros could play.

You'll probably hear the name Ballesteros mentioned at several points throughout the course of the weekend.

Ballesteros was a giant of the European team and helped them to victory on five occasions as a player and a captain.

His record of 11 wins, two draws and two losses when paired with his spanish team mate Jose Maria Olazabal is the best ever.

Jack Nicklaus was one of the pioneers to change the competition to Europe versus the United States so Ballesteros could play.

So what is happening and when?

This is your guide.

When is it on?

The match will be played over three days from Friday, 23 September until Sunday 26 September.

What format does it take?

The home captain gets to choose the format.

They will be starting with foursomes (better ball) early on Friday morning.

That will be followed by fourballs (alternate shot) in the afternoon.

The format will be exactly the same on Saturday.

How are the teams picked?

This time around the American's decided to do six automatic qualifiers and six captain's picks.

Europe's players qualify via rankings in the World and European points list, then the captain gets three picks.

Who are the captains?

Steve Stricker for the United States and Padraig Harrington for Europe.

What is foursomes, fourballs, better ball and alternate shot?

It's quite easy to understand.

In better ball, each player plays their own ball.

Whoever gets the best score is what goes down as the score that hole.

In alternate shot, one player tees off and your team mate hits the next shot.

You keep going until you hole your putt.

Both formats are determined on holes, not by strokes typical in golf tournaments.

What do you get if you win your match?

The winner of each match gets one point.

If you draw your match you get half a point.

As the defending champions, Europe need 14 points to retain the trophy.

How many points are needed to win?

Whoever holds the Ryder Cup only needs 14 points to retain the cup.

Therefore, that is the target for the Americans this weekend.

There are 16 team matches and 12 singles matches.

So 28 points are up for grabs.

When are the matches announced?

At the opening ceremony on Thursday, the captains will announce their pairings for the opening foursomes.

There are deadlines the captains have to meet to name their pairings for Friday afternoon and Saturday's matches.

For the Sunday singles, the deadline is one hour after play on Saturday.

Where is the Ryder Cup being played?

In America, Whistling Straits, in the state of Wisconsin.

The course has hosted a number of major tournaments.

It constructed alongside Lake Michigan with amazing views.

What exactly is the schedule?

First match tees off at 5:04pm, then at 11-minute intervals?

How can I watch the Ryder Cup?

Sky Sports has exclusive television rights to the Ryder Cup in the UK and Ireland.

Coverage starts at 1pm on Friday and Saturday and 5pm on Sunday.

If you're in the United States, Golf Channel and NBC Sports has the coverage.

In the immortal words of Jeff Overton: BOOM, BABY!

What are the teams?

What are the betting odds?

The Americans are firm favourites.

To lift the trophy:

What is a rookie?

A rookie is someone who is making their maiden appearance in the tournament.

Cantlay, Schauffele, Morikawa, Scheffler, Berger and English will be playing in their first Ryder Cups for the Americans.

While Shane Lowry, Bernd Wiesberger and Viktor Hovland are making their debuts in the competition for the Europeans.

NEXT PAGE: INJURED WOODS TO GIVE US SIDE MOTIVATIONAL SPEECH