Darren Clarke talks all things Ryder Cup, winning on the PGA Tour Champions and the importance of Darren Clarke CBD in his golf game. 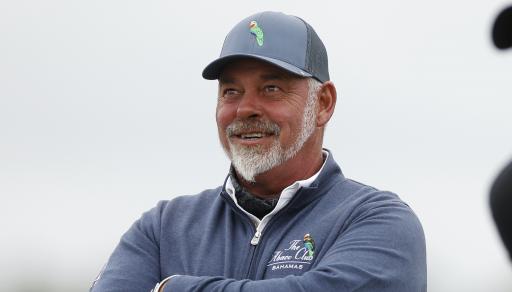 Darren Clarke believes that Team Europe will be prepared for the hostile US crowds at the Ryder Cup and the team's cohesion will once again prove crucial.

Speaking exclusively to GolfMagic, Clarke is as excited as the rest of us to see Team Europe in action and as a former player and captain, he knows more than anyone about what is required to win the Ryder Cup on away soil.

The 2011 Open champion believes there are different factors that have contributed to Europe's dominance in the event, commenting on the side's traditional spirit and determination.

"There are all sorts of theories on it, but long may it continue! Traditionally we have tended to be a bit closer and socialise more," said Clarke.

"This European team will be no different I’m sure but there will be no doubting the passion from both teams come Friday. I’m really looking forward to seeing what happens.

"You expect the crowd to be against you - hopefully in the right way - and our guys will be more than prepared for that, I’m sure.

"It’ll be an incredible occasion; it feels like we've been waiting for a long time for this and it's just something else that the guys have to contend with."

Unfortunately for Clarke, he is one of only three European captains to be on the losing side in the last 10 Ryder Cups. He led the side in 2016 at Hazeltine National but was beaten 17-11.

RELATED: IS STEVE STRICKER UNDER MORE PRESSURE THAN ANYONE TO DELIVER RYDER CUP VICTORY?

The 53-year-old has made five appearances in the event, his last appearance came in 2006 when he won three points for Europe at The K Club.

It was an extremely emotional week for Clarke as the tournament came shortly after his wife Heather died of cancer. Clarke performed incredibly in Ireland and was a vital part of the 18.5 - 9.5 win over America.

Having won 14 times on the European Tour, Clarke's career is now flourishing on the PGA Tour Champions. Last weekend, he beat KJ Choi and Steve Flesch in a playoff to win the Sanford International.

"It’s been a good year and I think I’m showing that I can be in contention when I’m playing well. Sunningdale was disappointing but Stephen Dodd was a worthy winner," added Clarke.

"It’s three wins this season now and I’m just enjoying working hard and trying to get in position on Sunday afternoon to be involved."

Earlier in the season, Clarke also won the TimberTech Championship and the Mitsubishi Electric Championship at Hualalai, bringing his tally up to three on the veteran's tour.

The man from Dungannon has experienced new horizons both on and off the golf course. This year, he teamed up with Sana Lifestyle to launch a range of premium CBD oils.

CBD oil can help golfers to sharpen and maintain focus and has also been seen to reduce nervousness whilst playing. CBD can also be a vital part of a golfer's post-round wellness routine and Darren Clarke CBD is aiming to dominate this market.

"I believe we have a strong product that can help golfers in lots of ways, and I've had some great feedback on it. For me, it’s particularly helped recovery but there are lots of benefits," said Clarke.

"It helps focus and dealing with stress on the course and even sleep."