Why golf on the Emerald Isle comes in perfect packages 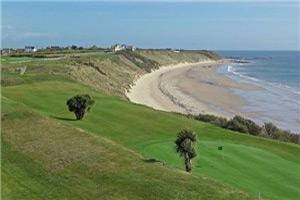 If St Andrew - presumably golf's Patron Saint - had a fourball partner, it would probably have been St Patrick. While their day job spread Christianity, at weekends they'd be out on the links fitting in nine holes before 11 o'clock Sunday service, then rattling off the back nine in time to mount the pulpit to inspire their evening congregations.

Their demeanour would likely be measured by their performances on the course, competitive and determined, sporting, yet passionate and liable to occasionally vent their frustration with the odd bit of turf thumping at a fluffed chip or missed four-footer.

Their abilities would gel perfectly. St Andrew, a long, straight hitter threading drives between the unseen bunkers of the home town course to which he gave his name and St Patrick with a short game opponents might curse as having divine intervention.

When it came to a summer break, St Andrew would stay among his flock but St Patrick would head off to a new land he had discovered, converting farming communities to his faith, carrying a handful of clubs, just in case the opportunity arose for a few holes.

St Patrick indeed found his religious salvation at the top of a 2,500 foot mountain - Craogh Patrick - overlooking Westport in the west of Ireland, where annually on his birthday (March 17) 60,000 pilgrims make the trek to the top. However, most pilgrims to Ireland are searching for an alternative holy grail - the chance to savour some of the most enticing golf courses the world can offer.

In this special feature and in conjunction with three of Ireland's leading golf package companies - North and West Coast Links, the appropriately name SWING (South West Ireland Golf Ltd) and Club Choice, we identify some of the best deals available to parties of travelling golfers keen to sample the most famous courses and some of the hidden gems of Ireland.

Originally part of the Jameson estate, Edward VII often visited the family  and on his last official visit in 1907 he unveiled a plaque designed for the occasion of the marriage between members of two great distilling families- Jameson and Haig. The Jamesons had a nine-hole golf course built on the site over 100 years ago, re-designed, extended and developed into a superb links by Bernhard Langer. Visitors to the Osborne brasserie can dine on delicious locally sourced cuisine.
Local sightseeing: Jameson Distillery, Guinness Storehouse, Trinity College, Kilmainham Jail.

Ideally located 30 minutes south of Dublin in County Wicklow, it's ideal for a compact golf break on courses that have staged the Irish Open. Druids Glen was originally the Woodstock Estate, which dates back to 1600, when it formed part of Sir Thomas Wentworth's landholding. The Druids Glen name originates from a stone altar of pre-christian worship, which was discovered during the construction of the golf course, in the thickly forested area overlooking the 12th Green. Local Sightseeing: Glendalough Monastery, Powerscourt House & Gardens, Powerscourt Waterfall, Wicklow Mountains National Park.

The first thing that strikes you about the 4-Star Ballyliffin Lodge Hotel & Spa in Co. Donegal is the spectacular panoramic view of Malin Head and the Atlantic Inishowen coastline. The old links course has been designed by Nick Faldo and is among the elite few courses that always make the ‘A’ list of discerning golfers from Europe and America.

The 69 en-suite bedrooms are contemporary in design and the hotel features the redesigned Counties Cafe Bar and Restaurant with a new Clubroom. The courses at royal Portrush have nosted numerous major championships including The Open and the British Senior Open and will test golfers of every ability. Local sightseeing: Giants Causeway, Bushmills Distillery, Carrick A Rede rope bridge.

HIDDEN GEMS IN THE NORTH WEST

Situated in a beautiful seaside resort in southwest Donegal, Narin and Portnoo GC was opened in 1930 and  is engagingly old fashioned with a meandering routing over and around the dunes. Recently re-developed as a par-73 layout with sharp dog-legs, par-3s over cavernous terrain and demanding low trajectory shots into the Atlantic breezes.

Established in 1891 Portsalon is one of the founder members of the Golfing Union of Ireland, just a short drive from Rosapenna Golf Hotel and Resort, with Derry and Belfast airports are close by. This unspoiled, uncrowded and natural links land is surrounded by the Knockalla mountains and the white, sandy beaches Lough Swilly.

*These packages are only available through North and West Coast Links. For further information call Justin Farrell (Tel:00353 91 868 642) or visit  www.northwestcoastloinks.com

Accommodation at the above SWING hotels is based on twin / double occupancy and includes breakfast and all taxes.  Single supplements available on request. Self drive car hire and chauffeur-driven coach hire may also be included should it be required. All services subject to availability at the time of booking.

Most westerly golf course in Europe nestled on the edge of Ireland’s dramatic southwest coastline. Each hole is carved from the natural landscape of one of the most unspoiled parts of Europe with hazards including a winding burn that twists and turns through the  course.

Golf has been played in Dooks since 1889 at this, the oldest club in Kerry and one of the first in Ireland. Gentle, rolling, sandy fairways beside breathtaking views of Dingle and overlooked by the magnificent  McGillycuddy Reeks, the highest mountains in Ireland.

Famed for its spectacular scenery and the intoxicating hospitality of its people, the Ring of Kerry Golf Club provides an experience not to be missed. This par 72 championship course overlooks Kenmare Bay and nestles between the Caha Mountains and the MacGillycuddy's Reeks.

Scenically situated alongside Cork Harbour, the club has played host to many national championships including the Irish Open. Founded in 1888 this parkland course provides one of the finest challenges to golfers of all abilities.

Note: These packages are only available through SWING. For further information contact
Rosa O'Shea (00 353 66712 5733) or visit www.swinggolfireland.com

Family-run hotel and course located on the shores of Lough Ree, near Athlone and 90 minutes from Dublin.  Its central location makes ideal for a Golf break. Course designed in 1993 by Ryder Cup hero Christy O Connor Jr, it has matured into one of Ireland’s premier inland Courses and ranked by in Irelands top 30. Hosted European Challenge Tour in 2007 & 2008.

(2 nights in Hunters Yard Rooms, full Irish breakfast, one dinner Kendals Restaurant, one round on Jack Nicklaus Championship course, E285 pps. Available midweek only January 1 to March 31, 2010, subject to availability with option to swap dinner for an extra round of golf)

Jack Nicklaus-designed course set in lush parkland near Kilkenny. Opened in 1991 with a match featuring Christy O'Connor Snr. and Nicklaus. Par 72 layout boasts rolling fairways, water hazards and contoured greens. Hosted the 2002 and 2004 American Express WGC events, won by Tiger Woods and Ernie Els respectively and has staged three Irish Opens. Signature holes include the stunning par-3 - a green guarded by a natural stream and lake, par-5 10th hole with its copse of trees and par-4 18th with water down the left and a narrow approach to the green.

Set in 180 acres of rolling parkland, 40 minutes from dublin airport and less than two hours from the Dublin ferry, the resort features self-catering homes, health club with swimming pool and  18-hole Christy O'Connor Jr golf course with its demanding water hazards. Will host the Junior Solheim Cup in 2011.

Traditional links created by Hawtree & Taylor in 1927, it's regarded as the 'jewel of the Southern Region of the Irish PGA' which held its  2001 and 2002 Championships here. Bristling with natural features including rough hollows and imposing bunkers.  Just 40 minutes from Dun Laoghaire ferry port, an hour from Rosslare ferry and similarly from Dublin Airport.

Local sightseeing: The Wicklow Way a self-guided walking trail and fishing from rivers and streams that flow off the Wicklow mountains.

Situated in the heart of Ireland’s lakelands and waterways region, with easy access from Dublin, Esker Hills Golf Club, with its unique landscape, Esker Hills is regarded as one of Ireland’s leading inland  and home to 2009 Irish Open champion, Shane Lowry.  A Christy O' Connor Jr. design, where no two holes are remotely alike and playable all year round. Says O'Connor: “Designing Esker Hills gave me enormous satisfaction, plotting the course through nature's own sand-hills and valleys.”

A luxury retreat located an hour from Dun Laoghaire and Rosslare ferry ports and 90 minutes from Dublin Airport nestled in wooded parklans with an 18 hole championship clifftop course overlooking the white sands of Ballymoney Beach. Designed by Peter McEvoy in 2002, it has hosted some of the world's leading golfers triple major champion and 2007 Irish Open winner Padraig Harrington. British Lions and Ireland rugby captain Brian O'Driscoll is a member here.

NOTE: These packages are only available through Club Choice which has negotiated special rates with the courses and ferry links. For further information call Tiernan O’Byrne (tel:  00 353 85 1091 76) or visit www.clubchoice.ie

What a cracking opportunity to savour a taste of Irish golf with your mates in this exclusive discounted offer to Golfmagic.com members.

For just £150 per-person we're offering the chance to take the Fishguard to Rosslare ferry, spend two nights in one of the resort's luxury cottages with full Irish breakfast and play two rounds of golf on the Philip Walton-designed championship course.

The package is based on four sharing a car on the Super Ferry (Mon - Thurs) until March 31, 2010 and is subject to availability and also based on €165 Euro conversion (November 11, 2009).
The 27-hole golf resort, with its comfortable on-site accommodation was opened in 1993 and is just five minutes from the Rosslare Ferry Port with panoramic views of the South Wexford coastline. St Helen's Bay also features a practice academy and driving range, while vibrant Wexford Town is only 15 minutes away with excellent shopping and dining and over 50 pubs to enjoy 'the craic' with the locals.

The Walton corse is packed with challenging holes depicting historic and geographical associations with the area, including Tuskar Rock (3rd hole) a major hazard to mariners,  The tunnel (4th) with its tricky entrance to the green and The Piers (13th) where original stone pillars still stand.

To take advanatge of this terrific offer (which must be booked through Club Choice) visit www.clubhoice.ie, call 00 353 (0)85 109 1765 or email: uk@clubchoice.ie (quoting 'www.golfmagic.com offer')

We identify some of the best deals available to parties of travelling golfers keen to sample the most famous courses and some of the hidden gems of Ireland.