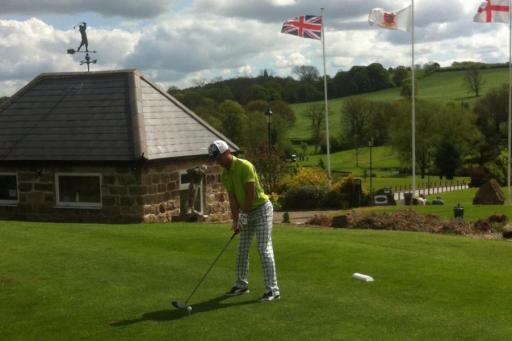 THE first thing to impress me about Horsley Lodge had nothing to do with golf, a hotel or food and occurred weeks before I even made the trip to Derbyshire. Before a course review I like to go on the club's website to get a feel for what I've signed up to – who knows, it could save me some vital strokes and at the moment I need all the help I can get.

Horsley Lodge has one of the best websites I have ever come across, in regards to golf, and it provides all the information one needs, and more, in an effective manner. The club has clearly embraced technology and is suited and booted in the social media stakes with Twitter, Facebook, Google + and more in their arsenal.

Thanks to the Golf GPS App and course flyover, which I had downloaded onto my iPhone from iTunes, I had a good idea about the parkland course, ranked No.1 in Derbyshire by HSBC course rankings, before I had even left the cosy surroundings of London flat.

The hotel and club, situated between Derby and Nottingham, was originally built in 1863 but was bought by Horsley Lodge Ltd in 1986 and under the stewardship of brothers Richard and Malcolm Salt, the family-run business has been revolutionised into what we see today.

Mind you, the club needs to be able to stick out as there is an abundance of top-quality golf courses in the area, with five courses in a 2.5 mile radius making the area a golfers’ playground.

As you drive into the club you are greeted by a large water fountain to your left (an omen of what is to come) and you can cast your gaze out over the course for the first time as you park your car.

The most pressing issue on arrival was to get a get fed pre-round so we were off to the restaurant, situated next to the reception and members lounge. Now, we’ve sampled some good grub over the years at quite a few golf courses but we both agreed that this one took the biscuit.

Lunch, dinner that night and breakfast the following morning left us almost needing a siesta as we could not stop eating the delicious food on offer and it’s no mystery why it has been in the ‘Derbyshire restaurant of the Year’ final two years running (let’s hope it’s third time lucky).

We were shown to our room which was a charming mix of old and new. The classic room had all the amenities you could need and the 2013 Certificate of Excellence from Tripadvisor, achieved by being in the top performing 10% based on reviews, cements its status as one of the best hotels in the region. We were also informed that the hotel had been listed in the AA top hotels list – this is not a setup devoid of accolades.

We’re always told that Northerners are friendlier than us Londoners and nowhere is this more evident than at Horsley Lodge. The warm atmosphere will have you feeling at home instantly and everyone at the club was an absolute pleasure to work with.

The club provides a generous putting area and if you are prepared to walk 200 metres from the first tee there is an even larger short game area where you can put your skills to the test. The driving range is on the small side but it allows you to loosen up and is long enough to hit driver which is essential.

The first five holes don’t pose too much of a challenge. As long as you don’t push your drive into the trees off the first tee (whoops) you should be able to score well and the short second hole is drivable in one if you’re in the mood.

Holes 7,8 and 9 offer up a tantalising stretch of golf that may have you heading to the clubhouse at the turn if you’re not careful.

Hole 7, stroke index 2, pushes you towards the trees on the right throughout the hole and you have a tricky angle into the green which is two-tiered. If you go straight at the pin, be careful of the large bunker short right and if you're a few yards too long, stand back and watch your ball slide off the back of the green.

Number 8 demands accuracy as water runs down the left of the hole all the way to the green with the right of the fairway brandishing punishing woodland and trees. It’s a short par-4 which will offer a great look at birdie with a good drive but it may be wise to play for position with an iron.

The 9th hole is an absolute cracker. A short par-3 with an elevated green, you need the accuracy of an archer to be on the dancefloor and not in one of the bunkers littering the green. Left of the hole is out of bounds and you don’t want to thin one as the clubhouse, with an abundance of glass, waits just behind the green.

As you start the back nine, the 11th hole will cause real problems particularly for visitors (but I'm sure the members struggle as well). Big hitters could go for this in one but they need to be brave as the blind tee shot is unnerving.  A stream runs across the hole near the green so you only need to hit you tee shot around 200 yards, leaving you around 150 in, so again we would suggest you leave the big stick in the bag. It's fair to say, at Horsley Lodge you should leave your ego on the first tee or you could be getting wet.

Hole 13 is a classic risk and reward hole. The closer you stay to the left, the shorter your approach but a pond and trees are there to deter you. The hole is a dogleg left so the sensible play is to bump it up the right leaving a good angle into the green.

The 17th is the signature hole and also my favourite, despite its difficulty which has earned it the reputation as being the hardest hole in Derbyshire. There isn’t too much trepidation off the tee but your approach, which will undoubtedly be 150+ yards, will need to be perfect as you need to fly the water surrounding the front and sides of the green. With the flag positioned right at the front, there really isn’t much room for error.

One of the greatest assets of the course is the USGA standard greens which are fast and roll true. It's so frustarting when a fantastic course is let down by the dancefloors but you will not suffer this disapointment at Horsley Lodge and I'm assured the greens play great all year round.

If you're long, straight and are able to putt well you could really score well on this track. However, it only takes a few errant drives to leave the fairway and you will be faced with a thick, sticky rough which can easily ruin a great round.

It is a course which punishes the wayward player and rewards the consistent, thoughtful golfer which in my opinion is how it should be.

It should also be noted that the club has been awarded a Golf Mark Award for its hard work and dedication to both junior and beginner golf which we are always keen to champion.

On leaving, the first thing I thought was when can I come back? A golf course bursting with character and the 17th is a hole which you will not forget in a hurry. This track is of the highest quality and is backed up by a hotel and restaurant of the same calibre.

Course news
Some golf clubs are increasing fees by up to 70 PER CENT
Features
10 different types of golf playing partners to avoid on the golf course!
Course news
RANKED: 10 of world’s most picturesque golf courses according to Instagram data
Course news
Chart Hills Golf Club confirms relaunch on track for spring
US Open
14 stunning pictures of US Open venue, Pebble Beach...