Will this historic country club deliver as a quality golfing experience? 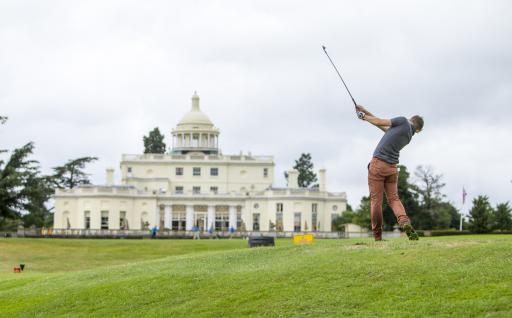 STOKE PARK GOLF & COUNTRY CLUB is located in a parkland area of Buckinghamshire on an 18th century landscape sculpted by Capability Brown and Humphrey Renton.

The course was designed by Harry Colt in 1908 and opened just seven months later with the focal point being the historic mansion clubhouse (as seen in the image above).

Unlike other parkland courses, this championship layout doesn't use heather as a defence but rather a variety of mature trees and fir oaks to catch stray golf balls.

This unique 27-hole course prides itself on natural undulating terrain, swift greens, and natural hazards to provide any level of golfer with a true examination of their ability. The main 18 holes measure 6,355 yards off the yellows, with holes 19 to 27 calculating 2,864 yards.

Visitor green fee winter rates (November to March) are £85 on weekdays and £145 on weekends, while juniors can play for £40 at anytime throughout the year.

The front nine is a tough test for any golfer with one of Colt's trademark par-3s presenting an uphill 175-yard tee shot at the third hole while the fourth has a vicious dogleg right, requiring an accurate tee shot.

The stunning seventh (pictured top right) is the signature hole of the course, designed by Colt's long-term colleague Dr Alister MacKenzie, created to resemble the 12th at Augusta National.

The back nine provides a more manageable set of holes but still delivers particular challenges with doglegs and swift two-tiered greens.

The 17th presents a test that combines a tough dogleg right off the tee with a long approach where you need to carry water as well as avoid two large green-side bunkers.

Holes 19 to 27 are a quality set of holes whether it's the lake running all the way down the left of the 20th, the par-3 21st over the bridge, or the risk-and-reward 27th that gives you the option to attack off the tee.

The greens, fairways and semi-rough are perfectly cut throughout while the vast amount of parkland trees gives the course real character.

There could not be a better place to put a practice putting green than outside the Stoke Park mansion (second right) that also looks over the first green.

The unique driving range down the right-hand edge of the first hole also has a sense of class with tree lines either side and a monument in the centre used as an alignment marker.

Stoke Park's team of PGA professionals are there to help your game with an indoor swing analysis studio (third right) that fires on to the driving range. Head of Instruction Stuart Rank commits his time to the golf academy which provides group lessons, health and fitness programmes, and puts the V1 Pro Video System to great use.

There is also a junior academy led by James Hoar, who I will be doing some junior-focused instructional pieces with, that runs a scholarship system for upcoming talent.

Stoke Park has a fantastic reputation for a reason, the beautiful surroundings combined with a characteristic 27-hole course really delivers top-notch quality throughout.

For me holes 19 to 27 are one of the top set of nine holes I've played with each having its own unique style while maintained to the highest standards. Equipment Writer Andy Roberts completed his 100-hole challenge for Macmillan Cancer on this nine-hole loop with adidas Golf and Strictly Come Dancing's James Jordan earlier this year.

It may be a bit expensive to play on the weekends at the current price, but the weekday winter rates are reasonable given the quality 27-hole experience you gain in return.