GolfMagic tees it up on the Costa Brava 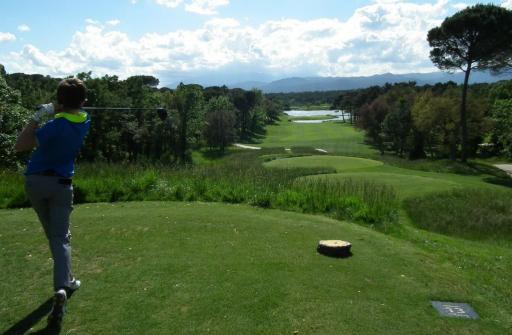 While waiting in the departure lounge at a drizzly Gatwick to board my EasyJet flight to Barcelona, I had a rare phone call from my golf-fanatic grandad.

“Oh, Andrew?” he said, as the thought initially crossed my mind he’d accidently dialled the first name on his contacts list.

“Mum says you’re off to Costa Brava to play some golf. Which courses are you playing?”

“PGA Catalunya, Platja de Pals, Par-3 Gualta and Golf Girona,” I answered, casting an eye down my itinerary sheet and breathing a huge sigh of relief that he actually meant to call me.

A long-enough-to-be-awkward silence ensued, shortly before realising he'd pressed the red button on his keypad.

“PGA Catalunya, Platja de Pals, Par-3 Gualta and Golf Girona,” I said, once calling him back.

“Marvellous. The PGA is probably my favourite course in Europe. I played there some ten years ago. Remember to keep your head cover on the putter. Those greens are fast.”

“Thanks, I will. I’m sorry I’ve got to board the plane now. It’s last call and orange face Phillis is waiting for me.”

“Never mind, grandad. See you soon. You can now press that red button.”

Three hours later, surrounded by pine trees and breathing in the incomparable array of fragrances of woodland - and not those of young Phillis - I realised how appropriate grandad's words had been as I rocked up on the first green at PGA Catalunya’s Stadium Course.

There are no worse phrases in this game than 'it’s still you' and that's exactly what happened when I stormed my 20-foot birdie putt some 12-feet past the hole. The old adage of grandfather knows best couldn’t have been more apt.

Despite making a three-putt bogey at the opener, and generally playing one of the toughest European courses I’ve had the privilege of playing, a 9-over 81 wasn’t too shabby - particularly with a torn knee cartilage, albeit aided by buggy and several painkillers.

On land close to Girona airport, originally earmarked for an F1 race track, PGA Catalunya - which also comprises the Tour Course - has rightfully emerged as the jewel in the Spanish Costa Brava's crown of ten different challenging courses, inland from its rugged Mediterranean coastline.

Since opening in 1999, PGA Catalunya has quickly gained an impeccable international reputation and is currently ranked the best course in Spain and third in continental Europe. It's easy to see why.

Home to the 2002, 2009 and 2014 Spanish Open, as well as current host of the European Tour's Qualifying School Finale, the Stan Eby (European Golf Design), Neil Coles and Angel Gallardo-designed Stadium Course showcases a stunning, rolling layout flanked by  pine, bent cork and oak forests, with spectacular views across the Pyrenees.

Two large lakes between the third and the fifth and 11th and 13th, pictured above, provide a scenic dimension to the course. It also features five tees for each hole, making it playable for golfers of almost any ability.

The highlight for me are those multiple elevated tees that lay out the holes in front of you, the closely mown fairways with strategically placed bunkers and the subtle borrows on greens that demand you bring the deftest of touch with your putter. These bentgrass dance floors are lightning quick and around 11 on the stimpmeter.

And you’ll be hard-pressed to find more impressive practice facilities. A 2,000 square-metre putting green and chipping area and five practice bunkers each containing different sand types producing lies you're likely to find at Augusta, St Andrews and Pebble Beach. There's even volcanic sand you could experience in Tenerife and Hawaii.

Holiday-makers will be familiar with the popular beaches of Tossa de Mar, Lloret and Blanes - less than two hours flying time from most UK airports - but the golfers among them might not have realised that the area around the ancient city of Girona is home to some of the finest courses in Europe.

PGA Catalunya had set a trend of what was to come.