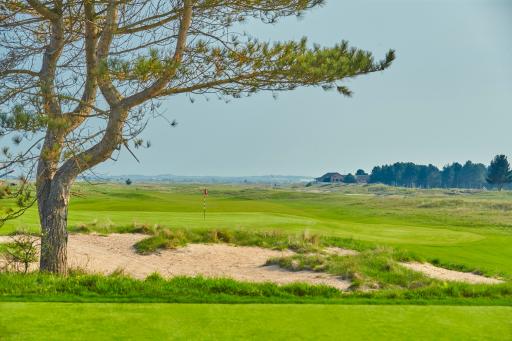 It’s a stretch that rivals anywhere on Old Blighty. Ascot, Southport? Sandwich is just as appetising.

It’s a tranquil segment of coastline, dotted with spectacular houses and the odd sheep and cow. It has an otherworldly atmosphere, as all the best golf destinations do, particularly if you are travelling from the ferocity of London, which is roughly an hour and a half drive away.

Prince's is the most northerly of the three, which sit side-by-side, surveying the English Channel.

We made the shuffle down from London for the re-launch of Prince's Himalayas nine in May. We were informed that this was the members’ favourite stretch, as the other two nines are infamous for their difficulty. This will have added further pressure to what was already a daunting task for architects Mackenzie & Ebert, a company who have lent their expertise to a variety of internationally acclaimed designs.

And if that didn’t have them sweating, the club’s pedigree will have turned up the pressure cooker.

Established in 1906, it has hosted the Open and is a current Open qualifying venue on the other two nines - the Shore and Dunes. It is regarded as one of the greatest 18s in the game, but the club set out to tweak the Himalayas in order to add another stretch of at least equal standard - at best, better.

In order to achieve this lusty aim, designers decided there needed to be two new holes added.

The first comes on just the second hole, which joins the old second and third holes together to make a daunting, long par five - especially if the wind isn’t working in your favour.

A draw off the tee is the ideal shot for a right-hander thanks to a dogleg, as bunkers on the right take reaching in two out of the question if you cannot shape your tee ball.

Should you find the middle of the bat from the tee, and you are blessed with distance, there is a chance at finding the green with your second. It requires another big hit to get there, mind.

The short par-three fifth hole is the other new addition, a spectacular design which is one of our favourite on the nine.

Requiring just a wedge, the pin is tucked on the left behind a mean bunker, with a fast run-off area to the left. Vistas over the Channel provide a thrilling backdrop, as well as stiff winds.

Golfers will need to hit a decent shot to be able to stop their ball on what is a relatively small landing area. As I found out - twice - pulling it left and trickling down the slope leaves a perilous chip.

The opening tee shot has also been made less knee shaking, with the left side of the fairway vastly extended. An easier opening tee shot - you won’t hear many golfers complaining about that.

The ninth tee shot also no longer goes over the dunes, which used to make it a sharp doglegging hole to the left. Rather, it’s a straight hole, playing much fairer with trouble off the tee in the line of sight as you draw the driver back. It’s a definite improvement.

A large amount of trees have been removed, making this more of a classic links test, and opening up stunning views. It makes it slightly less difficult off the tee, which is no bad thing. This is still a brutal test, but if played correctly, one can score.

There are still a few trees left out there for lining up purposes, but it takes a serious misjudgement to find yourself playing from their vicinity.

Golfers will notice wetlands as they make their way around, which adds wildlife to the course but also helps drainage. With this area of Kent receiving eight months’ worth of rain the day before we visited, it was a testament to the course we were even able to play, but we were astounded to find the course in decent condition.

The greens do have subtle undulations here and there, but aren’t as mystifying as those at Cinque Ports and St Georges, so if you get on a hot streak you can pick some shots up.

Alas, miss the green at your peril. Run-off areas have been made more damaging, with you ball slipping away from the putting surface should you err near the edge of the green. It’s more linksy, more fun, and likely to add more shots to your score.

With such a rich history at Prince's, the re-design allowed the club to bring some original designs back, and also pay homage to its legacy.

World War II fighter pilot PB ‘Laddie’ Lucas is one of the club’s most loved and esteemed sons.

A former Walker Cup captain and son of one of Prince's founders, he was forced to make an emergency landing on the third tee in July 1943 after being shot over Northern France.

It is said his knowledge of the land was so entrenched, Lucas knew the spot would make for a decent makeshift landing area.

After landing, he is reported to have run to an airfield and jumped into a new plane, before heading back out over the Channel.

A mounted propeller marks the spot where he brought the plane down, a brilliant addition to the round.

History heads (me). You will be turned on by the epic remodelled Himalayas at Prince's, and also the club's history. It's dripping in it. #thg

There are murmerings this will be nine of the club’s new “official 18” going forward. And we agree that it should.

The upgrades - and that’s what they are - have made the nine more playable off the tee and overall fairer.

The two new holes are fantastic designs in their own right, while the nine as a whole examines every part of your game and requires guille as well as imagination.

It has the feel of a more traditional links, with less trees on show and steeper run-offs around the greens.

Put this up against any nine holes on our island, and it holds its own. The architects and club alike deserve the plaudits that will inevitably come.

Located at the entrace is Prince's lodge, showcasing 38 bedrooms and two suites. The bedrooms are spacious and comfortable with en suites, with views over the course and the Channel.