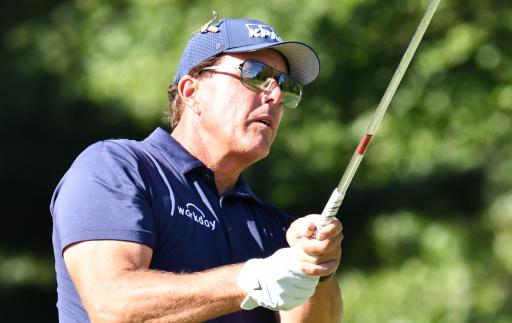 Should Phil Mickelson do the unthinkable and complete the career Grand Slam at this week's US Open at Winged Foot, he will also land a huge bet for one golfing gambler in the United States this week.

William Hill US tweeted last week that one punter lumped a gigantic $45,000 bet on the 50-year-old American to win this week's US Open at odds of 75/1, which would result in a whopping $3,375,000 payout should Lefty go on to win the tournament.

If Lefty wins, it would result in a $,, , which is the 2nd largest liability for an individual golf wager in William Hill US history

A first US Open title for Mickelson this Sunday would enter him further into golf's record books as just the sixth player to win all four of golf's modern majors. Tiger Woods, Jack Nicklaus, Gary Player, Ben Hogan and Gene Sarazen are the only players in the history of the game to complete golf's career Grand Slam of having won The Masters, The Open, PGA Championship and US Open.

William Hill US claims this outrageous bet on Mickelson is the second biggest liability for an individual golf wager in their history.

Mickelson enters this week's US Open in fairly solid form having won on his senior PGA Champions Tour debut two weeks ago.

The World No.53 did, however, admit to playing some of the worst golf of his year last week at the PGA Tour's season opener, the Safeway Open, where he went on to finish tied 44th.

How will Mickelson perform at the US Open? Share your thoughts and comments on our social media channels.