US Open 2020: Can anyone beat Dustin Johnson?

WATCH: Alex Lodge discusses the US Open and which players we think can combat Winged Foot this week. 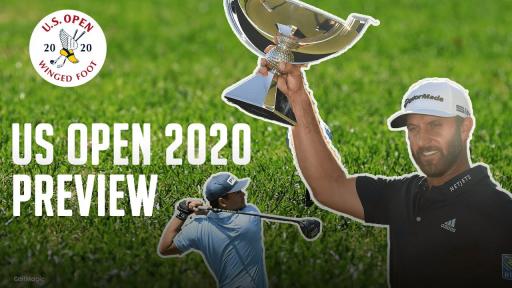 If you're one of those golf fans who enjoys watching the best in the world struggle to shoot level par, then you're in for a treat this week as the US Open heads to Winged Foot, one of the toughest courses around.

Watch the video below as GolfMagic's Alex Lodge previews the upcoming major and runs through who might be in with a chance of going toe-to-toe with the bookies favourite Dustin Johnson.

In the words of Alex Lodge

So, let's talk about Winged Foot to begin with. This 7477-yard par-70 course is an absolute mammoth of a course and is sure to play exactly like a traditional US Open venue.

If you haven’t heard of Winged Foot before, let me give you a bit of a rundown. Winged Foot has hosted the US Open five times previously, with the most recent being in 2006, when Geoff Ogilvy won with a score of 5-over par, which is fondly remembered as a tournament where multiple players let the lead slip in the final round.

The course isn’t known to be undulating, but the fairways are extremely narrow and the rough will be the most penal the players have seen this year, being up to six inches deep. The course would have seen a few changes since 2006, with a redesign taking place between 2016 and 2018.

Now, what can we expect from the course this week? What we know for certain is that this will be nothing like last year. Gary Woodland won the US Open at Pebble Beach with a winning score of 13-under par in 2019, after previous years coming under fire for the course layout being completely wrong, most notably at Chambers Bay and Shinnecock Hills. The layout at Pebble Beach was much less intimidating as a result.

This year however, we’ve had two tournaments on the PGA Tour come out with very tough layouts. The Memorial Tournament and the Northern Trust were both very tough layouts with Jon Rahm being the eventual champion for both events. Both tournaments were applauded and were incredibly entertaining for all fans involved, so you can expect similar this week, with a winning score very likely to be over par.

Dustin Johnson is the favourite this week and he’s still extremely good value. The last four tournaments he has played, he has been the 54-hole leader in each event. His game is consistent in every single statistic, most notably his driving and putting, which have done great for him in his previous wins. He is certainly the man to beat this week and I cannot imagine any other situation than him being in it come Sunday. He’s currently floating around the 8/1 mark this week which is still fantastic value for the World No.1.

Our Content Manager Andy Roberts picked DJ several months ago in our early majors prediction video. Back then, he was close to double the price!

Sebastian Munoz is in fine form and at 175/1, is certainly a player to throw a few quid on. He had a very strong finish at the FedExCup play-offs, finishing in the top 20 and going very quietly under the radar through the whole season. I expect him to be a surprise showing this week and at that value theres no harm.

Joaquin Niemann at 90/1 is another player who provides a lot of value. A great performance at The Northern Trust put him in contention to win and he is one of those players who performs well when the PGA Tour stops off at some of the tougher courses.

NEXT PAGE: How to watch the action at Winged Foot this week...