Jack Nicklaus believes Tiger Woods is the man everyone must beat at the US Open at Pebble Beach. 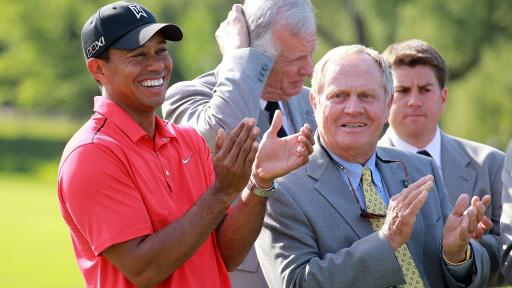 Jack Nicklaus considers Tiger Woods a clear favourite to win the US Open at Pebble Beach in two weeks time, a victory that would rack up a 16th career major and move him to within two of the Golden Bear's long-standing record.

Nicklaus was speaking to the media ahead of the 44th edition of the Memorial Tournament that he hosts - an event Woods has won a record five times at Muirfield Village.

"I would consider him THE favourite," Nicklaus answered when quizzed who he thinks has the best chance to win the US Open on June 16.

"He won by a record 15 shots when he played there [at the 2000 US Open]. Sure, absolutely, he loves it. Absolutely he should be the favourite."

But then Nicklaus sort of went and sat on the fence.

"There could be a lot of other guys that you could call to be the favourite, too though," added Nicklaus.

"He could beat them and should be a favourite or the favourite, yeah, but there are a lot of other guys that can still play pretty good."

From one legend to another.

Given all that, Nicklaus might be somewhat surprised to learn Woods is currently priced up at 14/1 as third favourite with the bookmakers.

Brooks Koepka has been installed as the early favourite at odds of 15/2 as he looks to win a fifth major in his last nine, and he sits narrowly ahead of fellow big-hitting American Dustin Johnson (8/1) who will be looking to go one better than his consecutive runner-up finishes in the year's first two majors.

As for Woods missing the cut at the US PGA Championship, Nicklaus believes it was inevitable after returning from the biggest win of his career. Nicklaus does not see a repeat of that happening this week at The Memorial, or in two weeks time at Pebble Beach.

"Coming off a win as emotional as The Masters was for him, I think it's understandable that that would happen,” said Nicklaus, of Woods missing the cut in his last start at Bethpage Black.

"I don't think he's going to let that happen again. I think that was a wake-up call again for him. And I expect him to play very well this week. I think he'll be play really well here, and I think he'll play well at Pebble."