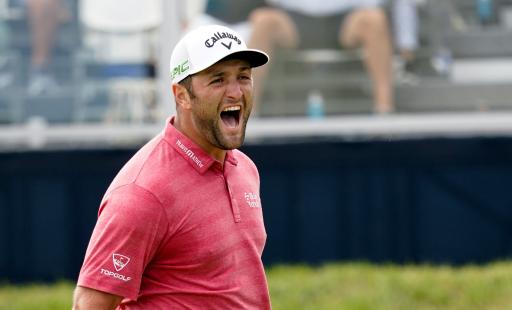 Jon Rahm clinched his maiden major title at the US Open and moved back to World No.1 after draining two incredible curling left-to-right birdie putts from 20 feet on the final two holes at Torrey Pines.

At the scene of his breakthrough victory in 2017 and by the cliffs of where he asked his wife to marry him, Rahm fist-pumped his way over the line in true Tiger Woods-style with one of the most incredible major finishes we have seen in recent times.

An absolutely LEGENDARY finish!@JonRahmPGA closes birdie-birdie on 17 and 18 to become the 121st #USOpen champion! pic.twitter.com/pfKmYlIAYe

The 26-year-old Spaniard started the final round three shots off the pace but immediately clawed his way back into the championship with two consecutive birdies at the 1st and 2nd holes.

Rahm handed one back at the 4th but then got it back at the par-5 9th when nearly holing out for eagle from 100 yards with his third shot.

Seven pars in a row followed to keep Rahm firmly in the hunt and just one shot behind leader Louis Oosthuizen, as the rest of his rivals fell by the wayside one by one on the back nine.

Rahm then joined Oosthuizen out in front when holing an incredible putt from 20 feet at the 17th hole, celebrating with a fist pump not dissimilar to one we have seen from Woods down the years.

The six-time PGA Tour winner then found the greenside bunker with his second shot on the par-5 18th, and with water lurking behind the pin, Rahm was forced to play sideways out the sand to some 20 feet.

However, with sights set on a first major title and returning back to No.1 in the Official World Rankings, Rahm stepped in and drained the putt followed by another epic fist pump to move one shot ahead for the first time all day.

Rahm then waited in the clubhouse for Oosthuizen to see out his round, and when the South African found the penalty area en route to a bogey-five at the 17th, he quickly moved into a two-shot lead.

Oosthuizen needed an eagle up the par-5 18th to force a playoff, but he could only manage a birdie from 10 feet to finish one shot shy on 5-under par.

"After what happened a couple weeks ago, I just stayed positive and knew good things were coming," said Rahm, who was forced to withdraw from the Memorial Tournament two weeks ago due to a positive Covid test when he was six shots ahead thru 54 holes at the time.

"I knew that this was a place where I got my breakthrough win, I have my parents here, and I got out of the Covid protocol early. This place just reminds me of back home with the weather and the greens. It resonates with me and I feel so confident here.

"I could just tell the stars were aligning for me this week, but I just can't believe I made those last two putts."

Rahm, who becomes the first Spaniard to win the US Open, was also quick to pay tribute to his childhero hero Seve Ballesteros, who despite winning five major titles never won the tournament.

"This win was for Seve, I know he wanted to win this one most of all," said Rahm.

Harris English finished in solo third on 3-under par, with Brooks Koepka, Collin Morikawa and Guido Migliozzi, who writes a regular blog for GolfMagic, back in tied fourth on 2-under par.