Justin Rose hits the front on day one of the US Open with a 6-under 65; Rickie Fowler and Rory McIlroy in hot pursuit. 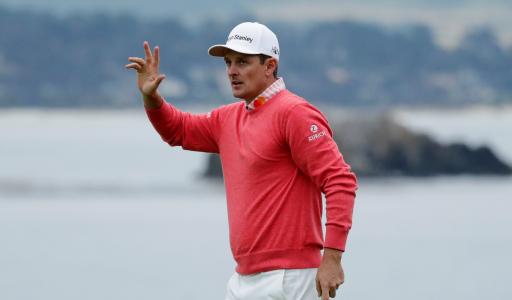 Rose's round of 65 matches the mark set by Tiger Woods at Pebble Beach in 2000 when he won by a record 15 strokes.

The Englishman moved to 4-under par after seven holes, highlighted by a stunning eagle-three at the par-5 6th, before handing one back at the tricky par-4 8th.

Following a run of pars to the 15th, the 2013 US Open champion stormed home with three consecutive birdies to put his nose out in front.

Rose was not at his imperious best from tee to green, finding 50% of his fairways and greens in regulation, but he was in red-hot form with his putter by taking just 22 putts, with a strokes-gained putting stat of 5.53 (1st).

And to strike fear in to the rest of the field, Rose believes there is plenty of room for improvement.

"I thought this would be kind of cool doing this in front of the great man himself," said Rose, who was playing with Woods, who posted a 1-under 70.

"I don't know if I did a good job of anything other than scrambling today, so it's good to know you can shoot a score like that and have something left in the tank."

Rickie Fowler got off to the perfect start in his bid to clinch his maiden major title by opening with a 5-under 66, joining compatriots Xander Schauffele and Aaron Wise, and South Africa's Louis Oosthuizen on the same score.

Fowler, 30, has finished second in every major championship before but has yet to join the major club, a similar story for Schauffele, 25, who has amassed runner-up finishes in the Open Championship and Masters.

"I know I can beat all the guys out here, and I know I'm good enough to win a major.

"It would be great if it was here at Pebble Beach, but we'll just have to see how it goes. You can't win the tournament on day one but you can certainly play your way out of it, and thankfully I haven't done that."

Schauffele finished his round in style with an 11-foot eagle putt at 18, while Oosthuizen, 36, who is looking to pick up his second career major title to add to his 2010 Open triumph, holed out from the greenside bunker for birdie at his final hole, the par-4 9th.

Rory McIlroy continued to keep his foot on the gas following his seven-stroke victory in Canada last week and the Ulsterman lies two strokes adrift following a solid 3-under 68.

"I would say this is some of my best golf since maybe the US Open at Chambers Bay in 2015," said a confident McIlroy.

Brooks Koepka, who is bidding for an historic threepeat, got off to a flying start with four birdies on the first six holes but stumbled home for a round of 70.