McIlroy on DeChambeau's putter: "I thought we got rid of anchoring putting three years ago" 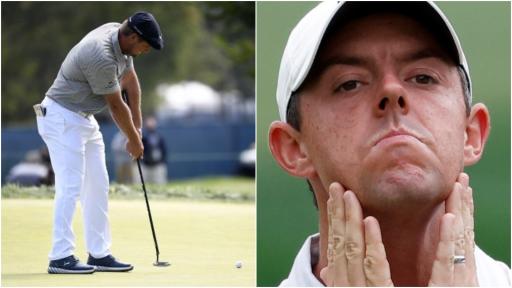 Rory McIlroy has questioned how Bryson DeChambeau is still able to get away with using an arm-lock putting method ahead of this week's US Open at Torrey Pines as he considers it to still be "anchored".

McIlroy, who is looking to end a seven-year wait for a fifth major victory this week, was quizzed by the media for his thoughts about removing greens books and anything else on the circuit such as arm-lock putting.

"I thought we got rid of anchoring putting three years ago," said McIlroy, referring to the anchored putting ban that came into effect in January 2016.

The journalist who asked the question then said "I don't know, did we?"

McIlroy responded: "No, probably not (laughter). Yeah, that is certainly something that I would like to see addressed, as well, and I think there's a common consensus with the players on that one too.

"Look, the game of golf is in a great place. I think we always have these conversations of what we can do to make the game better or grow the game or expand the game.

"I think it's in a pretty good place. Yeah, there's a couple of little things that us golf nerds want changed, whether it be green reading books or arm-lock putting or whatever it is, but from a whole and looking at the game from an entirety of it, I think it's in a really good place."

Greens books, which are used by DeChambeau, are expected to be banned next season on the PGA Tour.

McIlroy, who is chairman of the Player Advisory Council, is an advocate for such plans.

Speaking at Torrey Pines Wednesday morning ahead of the U.S. Open, Rory McIlroy, chairman of the Player Advisory Council, addressed the reports.

"Look, everything that’s talked about in those meetings is somewhat confidential, but what I can say, I think—I use a greens book, and I’d like to get rid of them," said McIlroy.

"I think everyone is in the same boat, most guys on tour are in the same boat, that if it’s going to be available to us and it helps us, people are going to use it. But I think for the greater good of the game, I’d like to see them be outlawed and for them not to be used anymore."

NEXT PAGE: BROOKS KOEPKA HOBBLES UP THE STEPS AT THE US OPEN - THIS IS NOT A GOOD SIGN!