Brooks Koepka HOBBLES up the steps ahead of the US Open!

Have Brooks Koepka and Bryson DeChambeau already had a fight at the US Open?! 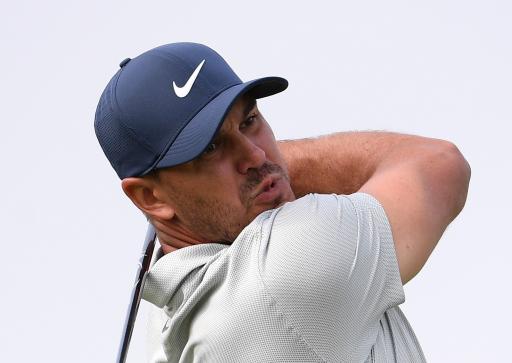 Golf fans have been reacting to a video the past 24 hours of Brooks Koepka hobbling up some steps ahead of the US Open at Torrey Pines.

Koepka has been nursing an injured knee for the past 12 months, and as a result has endured something of a rollercoaster season to date on the PGA Tour.

Despite notching a much-needed win at the Phoenix Open earlier this season and following it up with a pair of runner-up spots at the WGC-Workday and US PGA Championship, Koepka has also missed six of his last 10 cuts on the circuit.

RELATED: KOEPKA SAYS HE STRUGGLES TO "FOCUS" IN REGULAR TOURNAMENTS THAN IN MAJORS

While Koepka has made it clear in recent weeks that his knee is not bothering him a great deal out on the course, the latest snaps of the four-time major champion would appear to show otherwise as he hobbled up the stairs behind golf coach Pete Cowen.

Me after running approximately 1 mile pic.twitter.com/0kh9GCBqTJ

Golf fans have been reacting to the video, with some considering Bryson DeChambeau has already been in a scrap with him.

Some are even anticipating the thought of witnessing another golfer win the US Open at Torrey Pines on one leg, just as Tiger Woods memorably did in 2008.

Others believe Koepka, the current World No.10, was simply putting it on for the cameras.

Check out some of the comments on social media to the video:

"Bryson won on points I reckon."

"Bryson got them knees weak."

"Another broken leg victor at Torrey?"

"God this guy is such a baby."

"This is me walking to the range every morning."

"He definitely knew the camera was on him."

"Tiger walked an entire US Open on a torn ACL and won."

"Time to bet on Brooksy."

"Looks like he was putting it on for the cameras."

NEXT PAGE: BRYSON DECHAMBEAU ADMITS HE ENJOY HIS FEUD WITH BROOKS KOEPKA