Eleven Sports off to shocker as US PGA coverage branded "terrible"

US PGA 2018 coverage: TV newcomers are even forced to apologise! 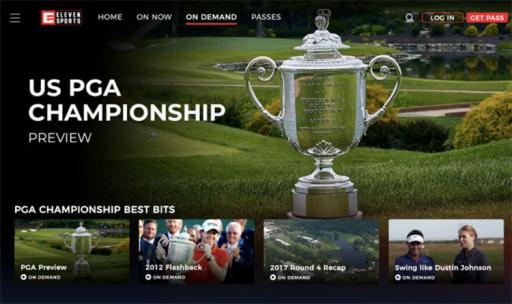 You know when everyone was criticising the BBC's red button coverage of last year's US PGA? Yeah, well it's fair to say most UK golf fans would have it back in a heartbeat this week.

Angry golf fans tore into Eleven Sports on social media this afternoon after technical problems left them unable to watch online coverage of round one of the US PGA Championship at Bellerive.

The TV newcomer, which was founded by Leeds United owner Andrea Radrizzani, is broadcasting the opening two days play on Facebook but it requires fans to sign up for a free seven-day trial to their online subscription service if they want to watch the action at the weekend.

The Facebook coverage was, however, branded 'absolutely terrible' as users were left watching blank screens due to buffering, while there was also high-pitched noise and pictures of commentators in the US preparing for their broadcast, checking their phones, seemingly unaware they were live on air.

Rickie Fowler got off to the perfect start with an opening 5-under 65, which currently positions him two strokes clear of a number of players including former US PGA champion Jason Day.

Defending champion Justin Thomas started with a 1-under 69, one stroke better than his playing partners Rory McIlroy and Tiger Woods, the latter recovering well after falling to 3-over early on during his round.

Eleven Sports' online broadcast started at 1.30pm and coverage was due to focus on the all-star group of Tiger Woods, Rory McIlroy and Justin Thomas, who teed off at 2.23pm BST, with pictures and commentary coming from the host broadcaster in the US.

Full coverage of the championship with Eleven Sports' own commentary team begun at 7pm.

There were problems soon after the start, however, and social media users flew off the hook. The slew of angry messages led to Eleven Sports posting an apology on Twitter, which read...

Here's a look a number of irate golf fan tweets after tuning in to Eleven Sports to watch the first round of the US PGA...

Gave up watching, great idea but keeps freezing and cutting off, keep trying to get it back on but no avail

A momentous day in sports broadcasting. Unfortunately, like the weather outside, it's been a damp squib tuning into ELEVEN SPORTS for live coverage of the 100th US PGA championship. 10 minutes in and all you can watch is a long beep and the letter K on a green lawn???!!! #WTF

@ElevenSports_UK can you show more golf and cut the guff pls....

@ElevenSports_UK that wee Seb guy is annoying as hell already! Offers no insight at all! Nothing but hot air!

10 mins into watching the #uspga on @ElevenSports_UK and I've turned off. Shocking coverage!! I miss @NickDougherty5 and @SkySportsGolf

Not a lover of this streaming lark #ElevenSports #USPGA lost picture twice, pic quality not as good, I have a 50” tv why does it only use 42” and you want me to pay £5.99 a month #onyerbikeson

@ElevenSports_UK I always watch the majors. I will NEVER subscribe to your terrible coverage. Shame on you @PGA for landing golf fans in UK with this. Get it back on Sky, where they know something about golf telecasting.

@ElevenSports_UK your coverage of the @PGAChampionship is diabolical. Shall not be renewing beyond my 7 day free trial. Sky is expensive but by comparison the coverage is a million miles better- I know which I would rather watch. #puresport #ornot #USPGA #elevensports

Eleven sports coverage of the US PGA first round is live streaming on Facebook. Don’t bother folks, it’s absolutely shit. How on earth this tournament is not being covered by a major broadcaster is unbelievable. Bet the sponsors are happy!!

Just had a check on Eleven Sports coverage of US PGA on Facebook , won't be doing that again

@ElevenSports_UK your coverage is fucking shite, 20 minutes into live coverage and still showing god damn highlights of featured groups. Why the fuck have @img given you this?!

Eleven Sports reportedly signed US PGA rights for a seven-figure sum after deals broke down between both Sky Sports back in 2016, and the BBC in 2017.

This week's US PGA marks the first event that Eleven Sports has broadcast. Its coverage is also available via their UK website and their app.

Eleven Sports has also won exlusive rights to broadcast La Liga and Serie A matches in the new season, meaning anyone wanting to watch Lionel Messi or Cristiano Ronaldo in action will need to pay for a subscription, which costs £5.99 per month, or £49.99 for an annual pass, if paid by August 31. From that date the price will rise by £10.