Golf fans react to seeing Kevin Streelman get the cold shoulder by Phil Mickelson. He did at least get a thumbs up. 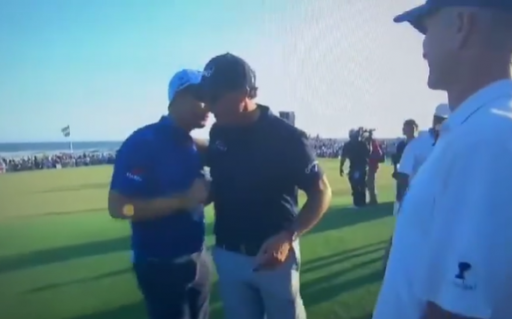 Kevin Streelman may have got to within a shot of Phil Mickelson's lead when making two consecutive birdies out the gate in the final round, but unfortunately for him that was as close as he would get to his compatriot.

Despite ending up signing for a 75 and finishing five shots off the pace one 1-under par in a tie for eighth, Streelman tried one last time to get even closer to Mickelson standing at the back of the 18th.

After seeing European Ryder Cup captain Padraig Harrington receive a warm embrace and congratulatory words in front of him, Streelman waited patiently for his turn to offer his congratulations to the oldest major winner of all time.

But unfortunately he would just receive the briefest of thumbs up as Mickelson moved on to the next group.

Poor Kevin just stood there and took it all in...

As a guy who got brutally left hanging by @FrankieBorrelli recently, I feel for Kevin Streelman here pic.twitter.com/W4hakGs0Cz

Check out some of the best comments:

"Kevin Streelman is me at social events."

"Poor Kevin Streelman getting the cold shoulder there."

Hate to see Kevin Streelman getting shafted there...  Phil wouldn’t give him the time of day."

"Get Kevin Streelman a body bag."

"Kevin Streelman fans everywhere have to be taking this pretty hard."

NEXT PAGE: BROOKS KOEPKA FUMING OVER PHIL MICKELSON'S SEA OF FANS DOWN THE 18TH AT US PGA