Mickelson responds to fan's request for a golf bag on Twitter... 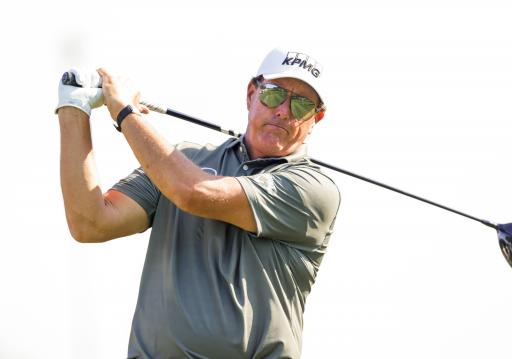 Phil Mickelson might be the new US PGA champion but he is also the unofficial King of Golf Twitter right now.

Mickelson, who became the oldest major champion of all time at the PGA Championship at Kiawah Island little more than a week ago, has been raising his social media game week by week... especially since the PGA Tour introduced its new Player Impact Program.

Lefty has been interacting with golf media, celebrities and fans alike since landing an historic sixth career major victory, but it was his response to one golf fan's request for a golf bag that really tickled us most.

While most Tour pros would have simply skipped past this comment without a reply, Mickelson thought he would fire back with a response.

Here's a look at what other golf fans were saying off the back of Phil's post:

"Dang dude, you got ratioed by Phil."

"Why do people think others should just give them things?"

"Phil, I want to drink coffee and hit bombs all day, but I have too many sons and too many bills. Please help! $3 million should suffice, direct message for my venmo."

"I heard a rumour that stores sell these, or you could always order one online, but hey, what do I know!"

NEXT PAGE: JUSTIN THOMAS GIVES UP A HUGE CHUNK OF HIS PAY CHEQUE TO HELP MIKE VISACKI IN HIS PGA TOUR GOAL