Tiger Woods: The clever thinking by one pro which helped bring him down

Tiger Woods is known for his charges on a Sunday. But this savvy mind trick helped one major champion emerge victorious in 2002. 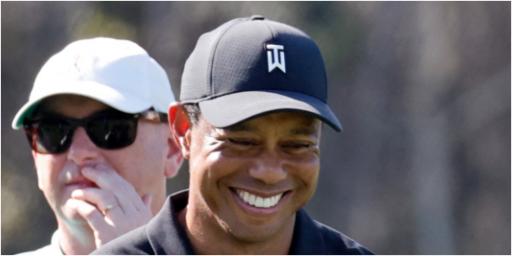 When it comes to Tiger Woods the list of players who withstood his charges on a major championship Sunday is short.

One of those names who managed to go toe-to-toe with Woods and emerge a winner was Rich Beem at the 2002 PGA Championship.

Beem, 51, now an Sky Sports analyst and commentator, will dine out on his Hazeltine victory for the rest of his living days.

And why not. He recently joined Golf's Sub Par podcast to re-live the moment, the roars and ultimately the emotion.

Beem explained that as he was being chased down by Woods he heard the whooping and hollering. How could you not hear the noise?!

Cheers from major championship Sundays are different, especially if it's the cat who is making his way through the field.

Beemer finally managed to finish one stroke clear of Woods, who is now 46 years old and back in rehab before another comeback attempt.

He told the podcast that the savvy trick he employed was attributing the noise to Fred Funk making birdies, not Woods.

Funk eventually finished six shots behind Beem, who reached 10-under par through his four rounds in Minnesota.

Related: Throwback to one of Tiger Woods' greatest escapes

"I was playing so good that I didn't care who anyone else was. Yes, I heard the roars coming down the stretch. And I'm not gonna lie, I heard them.

"I knew full well that it wasn't Fred, but you have to deflect. If you think about what is actually transpiring and what's going on, you're gonna be done.

"I think that's what Tiger did best - he got everyone else to think. I never bought into it that week."

Related: Stop what you're doing to watch Tiger stop what he's doing