Faldo believes Mickelson will receive a captain's pick for the Ryder Cup, and break yet another record in the process... 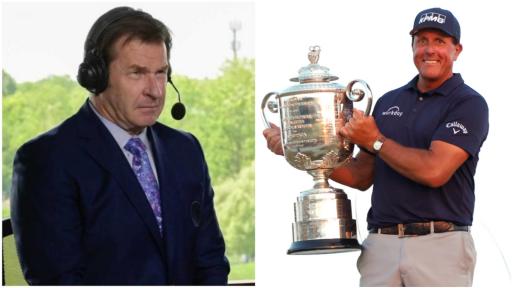 Sir Nick Faldo has welcomed Phil Mickelson into the 'Six Major Club' and now backed the 50-year-old American to break yet another 'oldest record' at this year's Ryder Cup.

Speaking to Telegraph Sport, the 63-year-old Englishman considers that United States Ryder Cup captain Steve Stricker should and will select Mickelson for a place in the team.

Should that happen, Mickelson (who turns 51 on June 16) will become the oldest ever Ryder Cup player by several months, replacing the current record set by Ray Floyd at the age of 51 years and 20 days at the 1993 Ryder Cup.

Mickelson already holds the record for US Ryder Cup appearances with 12, and his record at the biennial event against Europe reads 18-22-7 (W-L-H).

"I'm very happy and impressed to welcome Phil into the 'Six Major Club' with Lee [Trevino] - we could do with some company after, what 25 years together, apart from when Tiger [Woods] popped in for a brief spell," Faldo told Telegraph Sport.

"I'm pretty sure Mr Stricker will be more than considering Phil for the Ryder Cup now. Whistling Straits is another Pete Dye 'linksy' test and it's only right because back in the old days the US PGA winner was an automatic place in the US team, wasn't it?"

Faldo is correct. The PGA of America dropped that regulation for the 1991 Ryder Cup, incidentally at Kiawah Island where Mickelson won the US PGA last week.

John Daly won the US PGA in 1991 but ended up missing out on a place in the Ryder Cup that year.

As for European Ryder Cup captain Padraig Harrington's thoughts on a possible place in the team following his impressive tie for fourth at the US PGA last week, the Irishman insisted he will not even be considering such a scenario.

"I'm well past that time," said Harrington. "I'm too long in the tooth now at this stage, sweating through five rounds of golf and all that goes with it."

Harrington's thoughts 2019 Open champion Shane Lowry, who joined him on Sunday for a tie for fourth at Kiawah Island, would indicate his compatriot has already booked himself a plane ticket.

"Shane as we know is a big-name player and likes playing big golf courses on the big occasion," said Harrington.

"There's a quality about him, he wouldn't stand on a tee box and fear anybody."

NEXT PAGE: BROOKS KOEPKA'S FEUD WITH BRYSON DECHAMBEAU CONTINUES AT THE US PGA!