PGA of America APOLOGISES to Brooks Koepka and Phil Mickelson 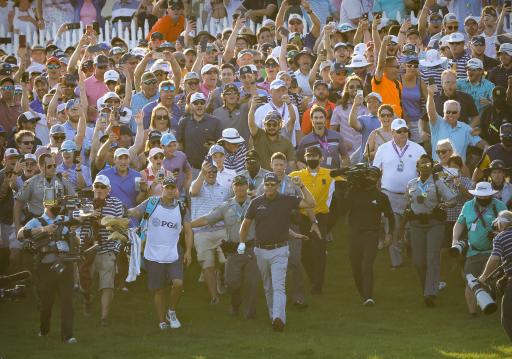 The PGA of America has apologised to both Brooks Koepka and eventual winner Phil Mickelson after a sea of fans flooded the 18th hole in the final round of the US PGA Championship at Kiawah Island.

Fans marched down the middle of the fairway as they marched Mickelson over the line for his sixth career major title, which saw him become the oldest major champion in history.

Koepka, who has been nursing an injured knee for much of the season, was fuming down the final hole after getting "dinged a few times in the knee in that crowd".

The four-time major champion also admitted that his caddie Ricky Elliott got "drilled in the face."

The US PGA Championship's Covid-19 protocols for fans included "no handshakes, fist bumps, autographs, photographs or selfies"; for people attending to "respect their [players'] space and watch your distance" and "avoid unnecessary touchpoints and large crowds".

RELATED: BROOKS KOEPKA FUMING WITH SEA OF FANS DOWN THE 18TH HOLE

Fans that had not been vaccinated were advised to wear face masks when they could not be socially distant.

Unfortunately for the PGA of America, all protocols seemed to go out the window as America's favourite son Mickelson entered himself into the record books.

"While we welcome enthusiastic fan engagement, we regret that a moment of high elation and pent-up emotion by spectators... briefly overwhelmed security and made two players and their caddies feel vulnerable," said PGA of America chief executive Seth Waugh.

"We always put player safety at the top of our list and are grateful order was restored."

NEXT PAGE: BROOKS KOEPKA AND BRYSON DECHAMBEAU'S ONGOING FEUD CONTINUES AT THE US PGA!