Mickelson becomes the oldest major winner in history, smashing a record that had been held for 53 years 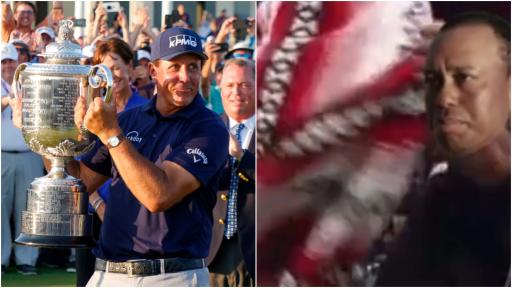 Tiger Woods has led the social media tributes following Phil Mickelson's incredible feat of becoming the oldest major winner in history following a two-shot victory at the US PGA Championship at Kiawah Island on Sunday.

Mickelson, who turns 51 on June 16, sealed his sixth career major title and second US PGA title (16 years after his first) while smashing the record as the oldest major winner that had previously been set by a 48-year-old Julius Boros in the same event 53 years earlier.

Lefty carded a final-round 1-over 73 to finish 6-under par and hold on for a two-shot victory over four-time major winner Brooks Koepka and former Open champion Louis Oosthuizen.

Woods, 45, who produced his own moment of magic when rolling back the years with victory at the 2019 Masters for a 15th career major, led the tributes to his old chum Mickelson on social media.

Truly inspirational to see @PhilMickelson do it again at 50 years of age. Congrats!!!!!!!

Thank you. I’m pulling for your quick return.

"Truly inspirational to see Phil Mickelson do it again at 50 years of age. Congrats!" tweeted Woods.

Mickelson then replied: "Thank you. I’m pulling for your quick return."

Woods continues to recover from his multiple leg injuries sustained in his horror car crash in Los Angeles back in February, with no return date yet set for the PGA Tour.

The former World No.1's tweet has got some golf fans hoping for a speedy and inspired return, though.

He said: "Fantastic golf this week at Kiawah, you played great. You didn't make any dumb mistakes, which is the whole key to winning major championships. As dangerous as the golf course is, you played it very well. My congratulations to you. Something strikes me that 50 years old is older than 46. Well done my friend, nice going, many more."

Take a look at some more tweets below, two of which came from Niall Horan:

That’s why I adore the game of golf. Any sports fan loves @PhilMickelson.

This is incredible. I feel like a true golf fan watching this. What a cool moment for the sport

Golf is insane. It’s just hitting me. The golf ball has no recollection of how old you are, and players can compete at any age. You just have to work and be willing to sacrifice things others aren’t. One day it’s great, the next it’s awful. What a sport I decided to play