Phil Mickelson has become the oldest major winner in the history of golf after fighting off Brooks Koepka and Louis Oosthuizen to win the PGA Championship. 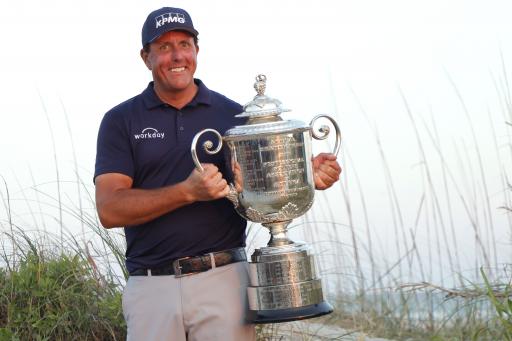 Phil Mickelson has won the PGA Championship at Kiawah Island, becoming golf's oldest ever major winner at the age of 50.

Mickelson shot a final-round score of 1-over-par to secure his second PGA Championship title by two shots and in doing so, he joined Lee Trevino and Sir Nick Faldo on six major victories.

"I've got to thank a few people and my wife is first on the list," said Mickelson.

"Without her love and support, I wouldn't be here and I can't wait to get back and see her tonight. My brother Tim, what a great job he did this week and I'm so appreciative of having him on the bag and being able to share this incredible experience.

"Also to Andrew Getson, who has taken me from swinging well to swinging pretty good, I really appreciate all the hard work he's put in helping me achieve this.

"This is just an incredible feeling because I just believed that it was possible, yet everything was saying that it wasn't. I hope that others find that inspiration, it might take a little extra work and harder effort to maintain the skills, but gosh is it worth it.

"I am so appreciative to be holding this Wanamaker Trophy."

Mickelson began the day on 7-under-par and one shot ahead of Brooks Koepka and two ahead of Oosthuizen, but after a two-shot swing on the first hole, Koepka briefly found himself in the lead.

The front nine chopped and changed as Mickelson made three bogeys in his opening six holes, but the popular lefty stayed in the lead which was helped by holing a trademark bunker shot on the par-3 5th hole for a birdie.

On the 10th hole, a two-shot lead became a four-shot lead as the 50-year-old birdied the first hole of his back nine, while Koepka and Oosthuizen both made bogeys.

Mickelson kept the door open for the challengers to come as he made bogeys on the par-4 13th and par-3 14th holes. He had dropped back to 6-under-par, however, the South African Oosthuizen remained three behind after making a damaging double-bogey on the 14th hole.

The 2010 Open champion wasn't giving up the fight in South Carolina, he made a crucial birdie on the par-5 16th hole to move within two of the leader, but Mickelson came right back with a birdie of his own on the same hole to take a three-shot lead on 7-under-par.

Koepka also birdied this accessible par-5 to reach 4-under-par with Oosthuizen, but three bogies on the back nine for the four-time major winner ultimately scuppered his chances.

Hundreds of fans flocked down the 18th fairway to follow champion-to-be to the green. Mickelson parred the last hole to secure a two-shot win on 6-under-par, in front of countless fans who circled the 72nd hole.

Mickelson, who was the oldest leader after 54 holes at a major tournament since Tom Watson in 2009, secured his 45th win on the PGA Tour and his first win since the AT&T Pebble Beach Pro-Am in 2019.

NEXT PAGE: RORY MCILROY "LOOKING FORWARD" TO COMPETING AT OLYMPIC GAMES IN TOKYO