GolfMagic has teamed up with American Golf to offer one lucky reader, their Dad and a friend the chance to play in a fourball with golf legend Michael Campbell... 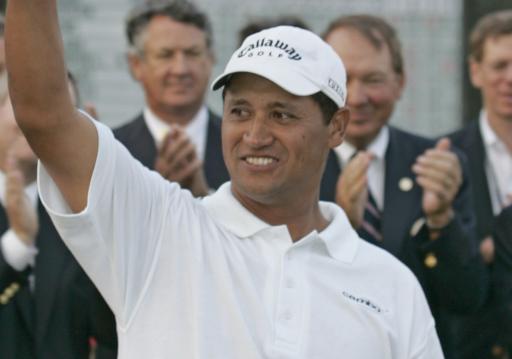 With Father’s Day fast approaching and the widely anticipated Legends Tour coming up this summer, American Golf is offering up the chance for one lucky GolfMagic reader, their dad and a friend to play with former Major champion Michael Campbell in a PRO-AM at this year’s Staysure PGA Seniors Championship in Liverpool.

The winner of this money-can’t-buy competition will be treated to three VIP tickets to the Staysure PGA Seniors Championship in Liverpool (29th July-1st August) and Dad will also be kitted out in the latest stylish golfing apparel, courtesy of American Golf including a Calvin Klein Colour Block Polo, Calvin Klein Micro Tech Shorts and a pair of ECCO Golf S-Hybrid Spikeless Shoes.  All party members will also be gifted a photograph and shirt signed by Michael Campbell for them to keep as special mementos.

American Golf is this year’s Official Retail Partner of the Legends Tour, working collaboratively to help improve the fan experience with interactive areas at tournaments. These interactive zones will give fans the opportunity to test different products while Legends Tour players will also be on hand to help engage and educate fans in how to enjoy the game and become a better golfer.  The Legends Tour fits perfectly with American Golf’s vision of inclusivity and making golf accessible to all levels and age of player.

International leisure brand, American Golf currently has 96 stores across the United Kingdom and Republic of Ireland, employs over 70 PGA Professionals and has a team of custom fitting experts who provide the most comprehensive custom fitting service available on the market today.