Billy Horschel has won his first Rolex Series Event and has earned a victory that he ranked as prestigious as the Players Championship on the PGA Tour. 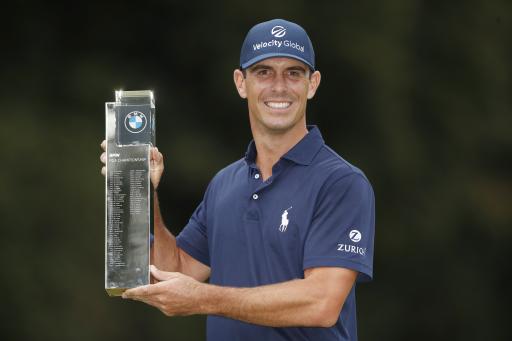 Billy Horschel made a stunning closing birdie to fulfil one of his great golfing ambitions and win his first Rolex Series title at the 2021 BMW PGA Championship.

The American watched the event on television as a child and fell in love with Wentworth Golf Club when he finished in the top five on his debut two years ago.

The 34-year-old said he would rank a win at the prestigious event alongside a victory at The Players Championship, and he carded a closing 65 to finish at 19-under-par and beat Thailand's Kiradech Aphibarnrat, home favourite Laurie Canter and Welshman Jamie Donaldson by one shot.

Horschel already has a World Golf Championships title under his belt this season and this victory moves him up to second on the Race to Dubai Rankings in Partnership with Rolex.

He becomes the first American to win a Rolex Series event and just the second to win the BMW PGA Championship after the great Arnold Palmer in 1975.

Wiesberger and the 2019 Open champion Lowry have earned their first selections to the European Ryder Cup, while Westwood will be making his 11th appearance at the event and his fellow countryman Fitzpatrick will make his second appearance at the matches.

NEXT PAGE: WATCH: KIRADECH APHIBARNRAT GETS SOAKED AFTER PLAYING SHOT OUT WATER AT BMW PGA!