WATCH: Kiradech Aphibarnrat gets SOAKED after playing shot out water at BMW PGA! 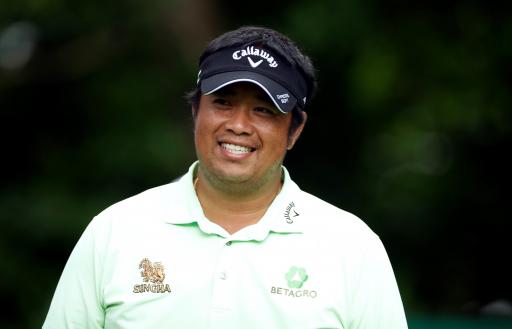 Thailand's Kiradech Aphibarnrat had something of a day to forget on day three at the BMW PGA Championship at Wentworth, and he compounded things by taking a soaking on the par-5 12th.

Aphibarnrat had moved into the outright lead at the European Tour's flagship tournament on 12-under par following rounds of 64 and 68 on the famous West Course in Surrey.

But two early bogeys at the 2nd and 3rd saw him quickly lose his lead.

Aphibarnrat would then board the par train thereafter with 11 straight pars.

To his credit, the par on the 12th was some effort given he drove right into the ditch filled with water.

Unprepared to take a penalty stroke, Aphibarnrat stepped in and splashed his ball out the ditch.

It's fair to say, he got pretty drenched.

WATCH APHIBARNRAT HIT HIS BALL OUT THE WATER

Aphibarnrat birdied the tricky par-4 15th to pull himself back into contention, but he would hand back that shot with a bogey at the par-5 18th to fall back to 10-under par.

He sits four shots off the pace set by Francesco Laporta, who finds himself at 14-under par following a round of 69.

Laurie Canter is one shot behind on 13-under par, with Billy Horschel, Jamie Donaldson, Adam Scott and Christiaan Bezuidenhout two back on 12-under par.

The Thai golfer has not won around the world since 2018 and currently finds himself outside the top 500 in the world.

NEXT PAGE: THOMAS DETRY DISQUALIFIED AFTER RULES VIOLATION AT THE BMW PGA CHAMPIONSHIP